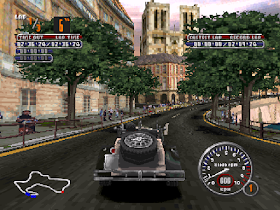 Genre: Racing / Driving
Perspective: Behind view
Vehicular: Automobile, Track Racing
Published by: SCi Games Ltd.
Developed by: Kung Fu Games
Released: 2000
Platform: PlayStation (PSX, PS1)
Arcade races in the retro style of the late 1920s and mid-1940s, which boast a high degree of detailing the surrounding world, which contains many objects, as well as beautiful texturing machines.
Races offer several game modes: Arcade (all routes open, but one is closed, and three levels of difficulty are available: Easy, Medium, Hard), For a while (single races on the tracks in an effort to improve the result of coming to the finish), Championship three cups for each period of time of sports races, and the passage of trails linearly and sequentially). Also in the main menu is available Quick Ride, which in random selection sets the level and the player's machine. After selecting a segment of the route, the player goes to the main choice - a series of cars.
Each machine has a production date and model range: Class A: 1927-30; Class B: 1931-45; Class C: 1946-57. Also, after choosing a car, you can stay in more detail on a specific model (with manual or automatic transmission), each of which has its own characteristics, reflected in three characteristics: Speed, Control, Acceleration.
Races are reduced to the ability of the player to avoid a collision with obstacles on the tracks (the speed decreases significantly, after which it is almost impossible to catch up with rivals), and also the choice of a certain model of the car whose characteristics will correspond to the terrain on which the races pass.
‹
›
Home
View web version