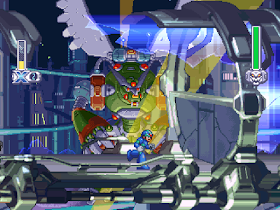 Genre: Action
Perspective: Side view
Gameplay: Arcade, Platform, Shooter
Art: Anime / Manga
Setting: Sci-Fi / Futuristic
Published by: Capcom Entertainment
Developed by: Capcom Co.
Released: 1997
Platform: PlayStation (PSX, PS1)
Some genres of video games have their own circle of fans, which something else simply does not interest. Flight simulators or golf are excellent examples. Although some game lovers just love to run faster, shoot more, destroy everything around - and all this, "without getting off the couch." Mega Man X4 is from this class. History is not very original. The General and the Colonel, instigated by the fiendish Sigma, are raising the uprising in the Army of Duplicates, former allies of our heroes - Maverick Hunters. Sigma bears devilish plans for the destruction of the human race (which created them!). He is going to destroy the Maverick Base, and when the "final" weapon is developed, it's easy to turn the Earth into dust. (I wonder if the wise men themselves are going to get lost?).
Of course, Mega Man and his faithful team-mate Zero can not allow such disgrace, they will frustrate the diabolical plans of the "reploids" and save the world from a terrible fate. In this game you can play for both X and Zero. The firm Capcom claims that two independent games are obtained. But this is, to put it mildly, a very strong exaggeration. The scenario remains general, and the differences are insignificant. The real difference is, HOW to play. If you play for X, then everything is very similar to the rest of the games of the Mega Man X. You run, shoot, collect armor for Dr. Light and a new weapon that opponents drop. If you play for Zero, then only slightly changes the tactics of attacking actions and overcoming obstacles. Zero is armed with a Z-Saber, not a X's Arm Canon, so it fights in close combat. For Zero, armor is not provided and it does not capture the weapon of the defeated enemy, but "studies" new tactical attacks. Therefore, the game for Zero is much more difficult. But the thing, of course, is not in characters, but in game tension, guessing of secrets, new weapons and studying combat techniques, in numerous and dangerous enemies. But in general, the game does not contain too much new and original. Good "Side-scroller" from the series Mega Man - and that's it.
Ultimate Armor X:
At Character Select screen press O twice, Left Six times, Hold L1 and R2 until the game starts. X's body should be darker almost a purple. Go to where you Get the Leg Capsule in Web Spider's level and you will receive Ultimate Armor.
‹
›
Home
View web version