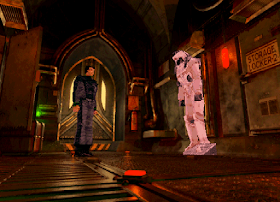 Genre: Action
Perspective: 3rd-person
Gameplay: Puzzle elements, Shooter
Narrative: Horror
Setting: Sci-Fi / Futuristic
Published by: Take-Two Interactive Software, TalonSoft
Developed by: Creative Reality
Released: 2001
Platform: PlayStation (PSX, PS1)
2017 year. Earthlings built on Mars research station Vita in order to detect life on the planet. But as it often happens, everything went wrong; after the discovery of the Earth, fragmentary messages arrived: "... danger, danger ..., we opened the Pandora's Box ..", etc., and a warning for those who are going to investigate this incident, the essence of which - only being left alone can be survive ("Stay Alone, Stay Alive"). Rescue mission in the composition of three astronauts (Kenzo, Karne and Matlock) is sent to Mars in 2018. The mission is built so that you can switch between the characters to solve different tasks. The warning was heard, so each of the game's heroes are separated from each other, exchanging information on the walkie-talkie. Prepare yourself for the horror that the Red Planet and the sinister inhabitants of the Vita station prepared for you.
‹
›
Home
View web version