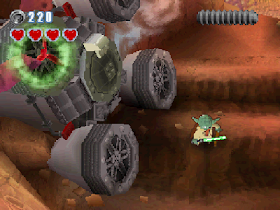 Genre: Action
Perspective: 3rd-person
Gameplay: Platform, Puzzle elements
Vehicular: Space Flight
Setting: Sci-Fi / Futuristic
Published by: LucasArts
Developed by: Tt Fusion Ltd.
Released: 2011
Platform: Nintendo DS
The Lego Star Wars series debuted in 2005 and sold 20 million copies worldwide. Its success can be called phenomenal. It's no wonder that, recreating the events of six Star Wars films with the help of Lego's virtual parts, British travel studio Tales turned to the "Clone Wars" animated series for inspiration.
Lego Star Wars 3: The Clone Wars is dedicated to the confrontation of the Galactic Republic and the Confederacy of Independent Systems. On the one hand - the oppositionist Count Dooku, the dark Jedi Asajj Ventress, the general-cyborg Grievous and millions of droids. On the other - valiant Obi-Wan Kenobi, Anakin Skywalker, his padawan Ahsoka Tano, master Yoda and the army of clones.
The plot twists and turns are presented in the form of dumb, funny and, alas, indistinct videos. When Traveler's Tales retold the classic films of George Lucas, everything was clear without further explanation. In The Clone Wars, the Jedi pantomime will leave in perplexity all those who do not regularly review the "Clone Wars". It is good that at the beginning of each mission the history story is told, otherwise it would be completely incomprehensible with whom and for what it is necessary to fight.
However, 20 million gamers chose Lego Star Wars not for the sake of the plot. Children and adults just like to spend time playing games in this series. Destroy objects from Lego details and collect new ones, solve puzzles, explore the neighborhood, collect characters and spaceships. Lego Star Wars 3 is true to the tradition of the series. Like six years ago, the characters run around together-three of them in levels, swinging light swords and breaking everything in their path. However, the developers decided to try a couple of new tricks. Particular emphasis is placed on large-scale land battles. It's hard to say that adding elements of the strategy went to the game only to the benefit: the "epic" battles between clones and droids are too messy. You capture control points, build barracks, cannons, tanks, and repulse endless enemy attacks. Ground missions turned out to be protracted and monotonous. Was it worth it for developers to be equal to a strategy like Warhammer 40.000: Dawn of War 2? Very much we doubt.
The Clone Wars have too many drawbacks in order to compete for the title of the best game in the series. The combat system as it was based on the pressing of one button, this one remained. The Jedi chop the air with light swords, leap high and falcons rush down, as if about to pierce the earth through, scatter crowds of enemies with the help of Force, but all this animation triumphs only causes a yawn. Too everything is simple and monotonous - there is no call. Fighting in Lego Star Wars 3 is tedious. More developers, as luck would have, multiply the number of opponents on the screen in comparison with the previous parts. Conveyors of the Confederacy of Independent Systems do not stop for a second - droids go wave after wave. They are literally stuck in them.
Perhaps the main mistake of developers is that they do not clearly formulate what is required from the player. The man who first launched Lego Star Wars will have a hard time. Instead of leading an inexperienced gamer, incidentally explaining what is what, the authors of the game immediately toss it into the thick of events. Meanwhile, in the world of "Clone Wars" there are so many conventions that without a guidebook you will never understand. Some tasks can be performed only by clone soldiers, others - protocol droids like C-3PO, and third - Jedi. Practically in any mission, sooner or later there comes a time when it is only in perplexity to scratch the back of the head and think about how to go further and where to run. What kind of character do you play? You start to look for hints at the level, but the developers are silent. Say, he dealt with. Often the solution is so unobvious that when a complex site is finally left behind, I want to write an angry letter to the publisher. Like, gentlemen, do you have a conscience? The children wept in the voice, stuck on the second mission against Count Dooku!
Fortunately, Traveler's Tales released too many games in Lego-style to hopelessly spoil the next project. Lego Star Wars 3 has not lost the ability to entertain. Even with all its shortcomings the game came out funny. In addition, this is the most beautiful of all Lego arcades. Modeling the characters turned out for a long time, animation and special effects are also at the highest level. Fans will certainly spend a lot of time to open all the characters, which are a whole legion. Even in order to quickly run through all the 18 missions, which are deployed on 13 planets, it will take twenty hours, or even more.
Lego Star Wars 3 leaves an ambivalent impression. In places it is terribly monotonous. Sometimes experiencing problems with the behavior of the camera. It is very difficult to accurately aim here. Very often you have to run around the level in anticipation of enlightenment: what's next to do? But at the same time, the spirit of a happy adventure is preserved, and for this "Clone Wars" can be forgiven a lot.
‹
›
Home
View web version