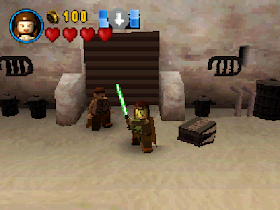 Genre: Action
Perspective: 3rd-person, Top-down
Setting: Sci-Fi / Futuristic
Published by: LucasArts
Developed by: Tt Fusion Ltd.
Released: 2007
Platform: Nintendo DS
The game was released in 2 parts on the PC and consoles of the previous generation. Lucas Arts then compiled all the parts into one, added new content and released as one whole story. This version of the game was released on many popular consoles, such as: PSP, XBox 360, Xbox, PS2, PS3 and WII.

Long time ago, in a distant, distant galaxy ... Many people know this story, because there are fans of star warriors all over the world. In 2005, several British during the census in the graph of religion wrote: "Jedi" (Jedi). Therefore, the story can not be painted - just you can look again at leisure all the series of films.

The sound comes from both the TV speakers and Wii Remaut. The sounds of blasters, lightsabers seem to come from your hands, squeezing this fantastic weapon in your hands, but can be boring with monotony, as the soundtracks change only after some time.

Control is carried out by pressing the buttons. But the developers have put several movements on the special features of WII. Construction will be faster if you wave your hands. The Jedi will move the object faster if you shake the nunchak. And of course, if you wipe Remaut, the Jedi will get his favorite lightsaber, and after that he will kill the droids, Imperials and other objects that are on the way.

The gameplay is very exciting, if you sit down for this game, then until you pass the level, two, three or the whole game (in the mood), it is unlikely to come off.
‹
›
Home
View web version