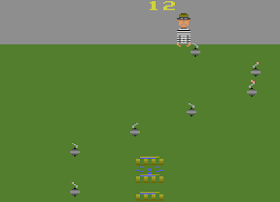 Control in the game was made with the help of a Paddle. The gameplay is quite simple. At the top of the screen, the "Mad Bomber" moves to the left and right along the horizontal line, a person whose favorite occupation is to drop bombs and watch them explode. The goal of the player is to stop the scoundrel by catching his bombs with three water tanks arranged one above the other. The tanks are moved with the help of the paddle to the left and to the right along the bottom horizontal of the screen. If at least one bomb reaches the bottom of the screen, one of the tanks collapses. After all the tanks are destroyed, the game stops. As the game progresses, the speed and number of bombs thrown at a time increases. For the captured bombs, game points are awarded, for each thousandth point the player receives a new capacity with water, however, only if he has less than the maximum three. The game ends, if you score 999,999 points, which goes according to some data in the case of an ideal game 2 hours and 46 minutes of continuous play.
The game process and the design of the game in different versions is almost indistinguishable from the original, with the exception of a few trifles, for example background backgrounds on Atari 8-bit and Atari 5200 and music on the Atari 5200.
Players who scored at least 3,000 points in Kaboom !, could send a confirmation photo to Activision and get a special badge - "Bucket Brigade". Similar strips for various achievements were sent to Activision and for other games, for example, Pitfall!. In addition, the company called on players who scored the maximum possible 999,999 points, and send confirmation of this to mark such a noteworthy achievement.
There are only a few officially confirmed cases, when the player was able to score a maximum of 999,999 points. Only one player was able to do this in all three versions of the game - American Tod Rogers (Atari 2600: NTSC - Game 1, Difficult B; Atari-8 bit: default setting; Atari 5200: default setting). In addition to him, Douglas T. Korekach (on Atari 2600: NTSC - Game 1, Difficult B and Atari 5200: default setting) and Robert T. Mruzek (on Atari 2600: NTSC - Game 1, Difficult B) was able to achieve the maximum result.

The creators of the game are David Crane and Larry Kaplan. Both of them were among the programmers who left Atari in 1979 because of dissatisfaction with the company’s policy of not paying programmers interest on sales even for creating hits.
Kerin is one of the world's most famous video game programmers, the creator of such hits as Pitfall !, Canyon Bomber, Grand Prix, Pitfall II: Lost Caverns, Ghostbusters, A Boy and His Blob: Trouble on Blobolonia, The Simpsons: Bart vs. the Space Mutants and Night Trap. Many of his games received various awards and were included in video game charts.
Kaplan is a famous American video game designer and programmer, one of the founders of Activision. Even before work on Kaboom! He participated in the development of Street Racer, Air-Sea Battle, Brain Games, Bowling and Bridge games. The name of Larry Kaplan, as a concept developer and designer, is on the reverse side of the packaging of Kaboom! for the Atari 2600. In addition, among the people who worked on the game, listed Paul Willson, adapted Kaboom! for the Atari 5200 and Atari eight-bit computers (Atari 400/800 and Atari XL).
The musical theme sounding in the Atari 5200 version of the game is the overture of 1812 by Pyotr Ilyich Tchaikovsky.

Kaboom! is ranked in the top ten best-selling games on the Atari 2600, ranking ninth after the games Pac-Man, Pitfall !, Missile Command, Demon Attack, E.T., Atlantis, Adventure and River Raid. In total, about one million game cartridges were sold. In 1982, at the festival "Arcade Alley Award" the game won the main prize in the nomination "Best audio and visual effects". In addition, Kaboom! several times got into various video game charts, including: 85th place in the list of 100 best video games of all time according to FLUX magazine, 9th in the list of 25 best Atari 2600 games by the version of Retro Gamer magazine. Almost in all reviews the game received positive reviews and high marks. The only exception is the version of the game on the Atari 5200, which received a sharp negative criticism. According to the MobyGames website, dedicated to the cataloging of computer games, the average score of the game Kaboom! is on a five-point system: 3.7 for Atari 2600, 2.8 for Atari 8-bit and 2.5 for Atari 5200. On the famous Internet portal GameFAQs, the original game has an estimate of 9.4 / 10 according to reviewers and 7.2 / 10 according to visitors to the portal.
‹
›
Home
View web version