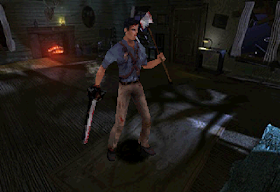 Before swap CD, save state to file, next CD, upload save state file.
Genre: Action
Perspective: 3rd-person
Gameplay: Shooter
Visual: Cinematic camera
Narrative: Horror
Published by: THQ Inc.
Developed by: Heavy Iron Studios
Released: 2000
Platform: PlayStation (PSX, PS1)
Game Evil Dead: Hail to the King genre survival horror is based on the movie trilogy Evil Dead (Evil Dead). The protagonist of the game, as well as three films Ash (Ash / Ashley Williams), whose role in the film was played by Bruce Campbell, he also voiced the character of the game. The game takes place 8 years after the events of the film Army of Darkness (Army of Darkness). Although one of the endings of the film Ash did not get home. Ash together with his girlfriend Jenny (Jenny) returns to the forest house. Jenny is kidnapped, and Ash needs to find her. The main opponent of Ashe in the game will play his dark side, also known as Evil Ash (Bad Ash / Evil Ash / Evil Ash).
The game is conditionally divided into two parts. On the forest with various additional objects: a farm, a church, a Boy Scout camp, a mine and medieval Damascus 730 years. In the game very often there are links to the film.
In the gameplay the game is similar to the series of games Resident Evil for Sony PlayStation. In the game, there is also a limited inventory, conservation takes place using a typewriter, which requires a tape (reel). Just have to cross items. Basically, you will need to collect various things that would advance further on the game. As in the film instead of the hand of Ashe chainsaw, a stock of fuel, which is limited. The combat system of the game is constructed in such a way that for an effective victory it is necessary to use two hands simultaneously, that is, to actually use two weapons at once. True, some bosses are immune to attacks and to defeat them will have to use auxiliary objects in their environment.
‹
›
Home
View web version