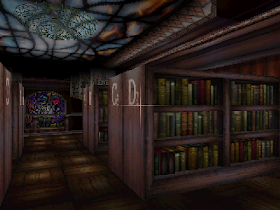 Genre: Adventure
Perspective: 1st-person
Gameplay: Puzzle elements, Survival Horror
Published by: FromSoftware
Developed by: FromSoftware
Released: 1999
Platform: PlayStation (PSX, PS1)
In Echo Night 2, which is the sequel to the first part, you still play for Richard Osmond, whose girlfriend Christina is missing. Last time she was seen in the library where she works, from there your adventures begin. While in the library you find old books that lead you to certain reflections, after which you are transferred to the Residence of Clancy, which is in another space and time to unravel the truth of Christina's disappearance.
‹
›
Home
View web version