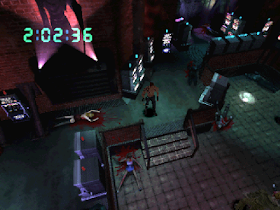 Before swap CD, save state to file, next CD, upload save state file.
Genre: Action
Perspective: 3rd-person
Gameplay: Puzzle elements, Survival Horror
Published by: Bandai America
Developed by: K2 LLC
Released: 2000
Platform: PlayStation (PSX, PS1)
Well, the reaction of gamers to this game was mixed. Someone dubbed her the clone of the first Resident Evil. I personally also noticed an incredible resemblance to Parasite Eve 2, and the rest for sure the game came very much to liking, and there is something for that.
Of course, you can not call the game a horrible horror. But that's how we have to survive. We will miss practically everything, from health to ammunition. Sometimes you will have to run around banally on the level of monsters to collect a handful of cartridges or find a freebie (at least for that Bounty Points are not removed).
The purpose of the game Countdown Vampires - as it becomes obvious, to understand the reason for the mass mutation of people in vampires and other evil spirits. And it all started so well. The main character Kate Snyder is in a popular club, to protect VIPs. Everything is going well, the tusovka is in full swing. And then, where do vampires come from, start biting dancer-strippers, panic begins, everyone dies. Now rake it now ...
We will have a wide selection of weapons. Initially, we will have a pocket knuckle bruiser, then a 9mm bullet, then a shotgun. After soothing, we can return the human form to the vampire by dousing it with white water, or simply shoot it.
If you pass the game quickly (less than 8 hours), you will open a new game character, previously unavailable, as well as a new game mode. In general, a sort of gift for the fans of the game Countdown Vampires. In general, I think the game is not bad and you can safely spend 1-8 hours, your precious time.
‹
›
Home
View web version