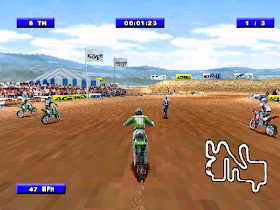 Genre: Racing / Driving, Sports
Perspective: 1st-person, 3rd-person
Vehicular: Motorcycle
Published by: THQ Inc.
Developed by: Funcom Dublin Ltd.
Released: 2001
Platform: PlayStation (PSX, PS1)
Developers of games for the PlayStation are not too willing to pay attention to motocross. And games about this sport is clearly not enough. Probably, for this reason Championship Motocross attracted so much attention from the players.
Although for accuracy it is worth noting that the game is very well made, and it left behind many competitors. Now here is a continuation in front of us, which in refuting the words that such products are never successful, quietly and pleasantly pleased us with its improved quality. Undoubtedly, everyone who has sat down to play in the first place should pleasantly dumbfound the schedule, to which after passing the game, I did not have any comments. The trails are differentiated in detail, like the background. The road is always visible at a decent distance ahead, which allows you to prepare for any maneuvers, including jumping on the trampoline. The motorcycle itself and the pilot sitting on it are perfectly detailed. True, all the other participation of the race, like each other as two drops of water, not counting the differences in the coloring. Special effects, although present, are few. It's just a glare from the daylight and a spray of dirt from under the wheels of motorcycles. But they are beautiful looking.
Also, despite the fact that I'm an avid fan of simulators, I'm ready to shower a bunch of words of praise and a physical model of the game. Let it arcade to the last character in the code of the program, but it allows you to feel the frantic pace of the race, which would be almost impossible to convey in the simulator. When you do not have to once again think about the correctness of driving, but there is only a route ahead and a button of gas.
Management, by the way, fits in four buttons. But even about the brake can be forgotten - the need for it is very rare. To fall off a motorcycle in numerous turns and after jumps on jumps will be a difficult matter. Even collisions with opponents do not particularly affect your speed. In short, long live the arcade!
But the tracks were taken with all responsibility and reliability, which ultimately had the most positive effect on the result. They are present and the ups and downs, and other delights of relief, which can be found only in motocross. But this is about courses in the open air, and in fact there are also tracks in the stadiums. On them the whole road passes in one plane, as on the plain. But there are just huge jumps that you will not find anywhere else and on which you get amazing leaps. It is at such moments and on such tracks that you begin to realize that you are really playing a game about motocross.
But do not think that the game is good only these aspects. In it still there is a heap of modes. Which, by the way, was so lacking in the last part. In the career mode, albeit simplistic, but you can be the manager of the team, distributing the monetary allowance for the necessary parts or buying a new motorcycle. Most dig into the garage, preparing for the race. But this is really not so important in the game, because the main pleasure can be obtained only during the race. And this will not be a fake feeling, as often happens in other games.
‹
›
Home
View web version