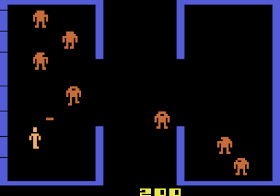 Genre: Action
Perspective: Fixed / Flip-screen
Visual: Top-down
Gameplay: Arcade, Shooter
Setting: Sci-Fi / Futuristic
Published by: Atari
Developed by: Stern Electronics
Released: 1982
Platform: Atari 2600
This is one of the canonical examples of the maze of the game, in which the player must navigate the labyrinth-building and at the same time shoot enemies.

The player controls the green man with armed sticks. Using the joystick and the fire button, the laser is activated as a weapon. The player passes a simple labyrinth, filled with numerous robots that are able to shoot at the player's character. The player can be killed by shooting by getting in the way of the enemy or from the explosion of the robot, coming into contact with the electrified walls of the labyrinth, or by touching the player's nemesis, the evil Otto.
Evil Otto is unusual with regard to games of that period, because there is no way to kill him. Otto can go through walls with impunity and come into contact with the player's character. If the robots remain in the labyrinth, Otto moves slowly, about half as slow as a humanoid, but he accelerates to match the speed of a humanoid as soon as all the robots are killed. Otto moves in exactly the same way as the player who goes left and right, but he can move faster than the player, when the latter goes up and down; Thus, no matter how close Otto is, the player can escape as long as they avoid moving up or down.
The player moves forward, breaking out of the maze through a hole in the far wall. Each destroyed robot gives 50 points. Ideally, all the robots in the current labyrinth will be destroyed before the player runs away, thus getting a bonus for the maze (ten points per robot). There are 65,536 rooms in the game (256 × 256 grid), but due to the limitations of generating random numbers there are less than 1024 labyrinth layouts (876 unique). The game is controlled by only one controller, but two-user games can be performed alternately with the joystick.
The game is most difficult when a player enters a new labyrinth, since there is only a short interval between the entrance to the labyrinth and all the robots shooting the player. For a beginner, this often means several deaths in quick succession, since each death marks the beginning of a new labyrinth mock-up.
Another unforgettable feature is the actions of robots, unlike opponents in most games of that time, Berzerk robots are known for being remarkably stupid, killing each other, running on themselves or crashing into walls, shooting at each other, and also colliding with Otto . Since they shoot to the right and from above, it is advantageous to shoot them from the walls going to the left or bottom. This creates a significant disadvantage for beginning second players, since the second player starts on the right side of the screen. This can be corrected by closing the top or bottom on the first screen, and then going straight to the second screen. From this moment the second player can go to the right, as the first player. Anyone who can pass the second screen without losing his life consistently and understanding the advantage from left to right, already has no shortage in starting the second. Thus, in the championship game without problems you can use a two-user game.
As the player's points increase, the color of enemy robots changes, and robots can have more bullets on the screen at the same time. Once they reach the limit of simultaneous screen bullets, they can not fire again until one or more of their bullets explode; The restriction applies to robots as a group, not individuals.
Two different versions of the game were released. In the original version, the sequence looks like this:
The revised version, which had a much larger volume of production of the two, has a longer color sequence after the blue robots:
In the game, up to six screenshots can be displayed simultaneously. This includes the player, and five from any robots at any one time.
To balance the significantly increased threat from robots in the second version, Otto's pursuit rate remains at his normal level, half or equal to the player's speed.
In both versions, a free person can be rewarded with 5000 or 10,000 points set by internal DIP switches.
‹
›
Home
View web version