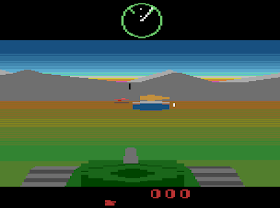 Genre: Action, Simulation
Perspective: 1st-person
Gameplay: Arcade, Vehicular Combat Simulator
Interface: Direct Control
Vehicular: Tank
Setting: Sci-Fi / Futuristic
Published by: Atari
Developed by: Atari
Released: 1983
Platform: Atari 2600
In 1983, the Atari 2600 visited the tank action BattleZone, which in 1980 became a model of technological breakthrough in the arcade game sphere. The game has kept a dashing gameplay after moving from the halls of arcade machines to the home consoles. This pseudo-3D shooter outperformed many analogies in its genre, including Wolfenstein 3D. The adapted version of BattleZone, called The Bradley Trainer, even tried to adapt for the training of US military personnel, but it did not grow together: Atari put on the army of Uncle Sam only two training units, and the cooperation was completed. BattleZone itself grew into a long-lived series - so, for example, last year there was a remaster of BattleZone 98 Redux.
‹
›
Home
View web version