Attack of the Mutant Penguins (Jaguar) 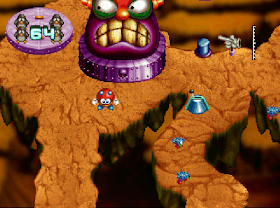 Genre: Action, Strategy / Tactics
Perspective: Bird's-eye view
Setting: Fantasy
Published by: Atari Corporation
Developed by: Sunrise Games Ltd.
Released: 1996
Platform: Atari Jaguar
The game Attack of the Mutant Penguins is also known as Mutant Penguins. The game is remotely similar to Lemmings. As usual, aliens attack our Earth, before the invasion they decided to familiarize themselves with what is to be dealt with. For this they mistakenly chose a video about the animals. From which they concluded that the dominant race on Earth are penguins. Having assumed their appearance, they descend to the ground, and realize their mistake. To somehow get out of this awkward situation, they decided to get dressed. Because of this, all the penguins on the ground were divided into clad and ordinary stripped penguins. The main characters in the game are Rodney and Bernard. You need to choose one of them. The goal in the game will be to divide ordinary penguins and mutants. Penguin mutants must be destroyed or locked. In general, do not let Mutant Penguins get to Doom Scales weapons. For your own purposes, you can use various mechanisms located on the levels.
The levels in the game are thematic, for example, cowboys and Indians, Elvis, etc.
There is a mode of playing Pandemonium, not to be confused with the game for the PSX under the same name Pandemonium. In this mode, you have to fight against an infinite number of enemies.
Good logic game.
‹
›
Home
View web version