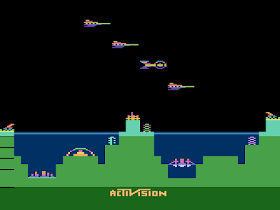 Genre: Action
Perspective: Side view
Visual: Fixed / Flip-screen
Gameplay: Arcade, Shooter
Published by: Imagic
Developed by: Imagic
Released: 1982
Platform: Atari 2600
The alien ships (Gorgon's fleet) are shooting the underwater country of Atlantis! It seems that the ancient civilization is about to disappear completely. We need to protect the underwater world and as soon as possible!
You have at your disposal only three gun turrets - two on the sides and one in the middle. And the city is covered by a powerful shield (which can also collapse if you do not defend well). If you still can not save one city, depending on the points you have gained, you have a chance to restore it.
‹
›
Home
View web version