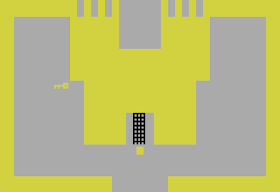 Genre: Action, Adventure
Perspective: Top-down
Gameplay: Puzzle elements
Visual: Fixed / Flip-screen
Interface: Direct Control
Setting: Fantasy, Medieval
Published by: Sears, Roebuck and Co.
Developed by: Atari
Released: 1980
Platform: Atari 2600
One of the first games in the genre of action-adventure. The creator of the game, Warren Robinett, became the first known developer in the world to put the Easter egg in the game

The game was created under the impression of the text game Colossal Cave Adventure, created by Will Crowther and modified by Don Woods. Despite the fact that the prototype of the game was textual, the game itself is graphic. Adventure was released in a total circulation of a million copies, making the game ranked seventh in the ranking of the best-selling games for the Atari 2600 in the history of the platform.
In 1979, developers were not allowed to put their names to the works being produced. Robinett went on the trick, making a hidden mention of himself in the game, thereby making what is now called the Easter egg. According to Warren, the youngest player from Salt Lake City was the first who managed to discover the secret, which he wrote in Atari.
The Easter egg could only be found at level 2 or 3 of difficulty by finding an "invisible" (merging with a common background) object with a size of 1 × 1 pixel and delivering it to a secret room through a false wall (in other circumstances, the passage does not reveal itself) in gold castle. Having reached the secret room, the player received a message "Created by Warren Robinett".

The main task of the player is to find the cup and return it to the golden lock. The character of the player, represented by a simple square, travels around castles, labyrinths, various rooms. In some of them lie a sword, keys, each of which can unlock a certain lock (gold, black and white), a magical bridge that allows to move through walls, and a magnet that attracts other objects.
In the labyrinths there are three dragons that guard important items and you can only kill with a sword. Also there is a bat that can arbitrarily take or leave items in rooms, and also steal them from the character. The character can also grab it and travel on it through the labyrinths.