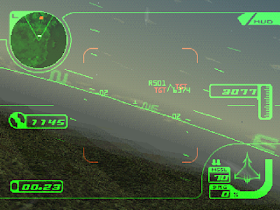 Genre: Action
Perspective: 1st-person, Behind view
Gameplay: Shooter, Vehicle Simulator
Vehicular: Flight / Aviation
Published by: Namco Hometek Inc.
Developed by: Namco Limited
Released: 2000
Platform: PlayStation (PSX, PS1)
Allow me to explain at once. On the PlayStation there is no place for serious flight simulators, for them there are powerful PCs. On the PSX, there can be only an arcade "flyer", and a point. Here's the series of Ace Combat fits perfectly into the genre of such "lightweight" flyers, disguised as simulators, and, therefore, without trying to draw from the PSX impossible, looks great and is played. All three parts of the AU on the output immediately received the honor to be called "the best in their genre", climbing the tops of the charts. Even in the absence of competitors, such a result is amazing: you try to distract gamers from fighting games and races (here, by the way, the series from Namco is also traditionally in the lead) and plant for a simplified but simulator. Remember how often in the lists of predilections of players appear similar games, and all at once it becomes clear.
And so, the third part. In appearance from the previous differs if not crucially, it is very significant. The trendy design of the interface at first slightly confusing, but after a while you start to get used, and all this can please. With the Ridge Racer Type 4, the Namkovites jumped to the very edge of the parapet of the advanced line of modern graphic design, and in Ace Combat 3 the bridgehead was successfully secured. So, or otherwise, in an individual who usually does not start his morning with a fresh issue of the magazine, this kind of standard game menus can cause a wide bunch of emotions, from pleasant amazement to epileptic seizures in particularly impressionable ones. What instigators and sought. Graphics, taking into account the platform, at the highest level: everything here is worked out to the smallest detail, special perfectionists can, looking closely, to distinguish even the "floating" air around the nozzles of aircraft. Landscapes in high screen resolution, the latest special effects, blah blah blah ... in Namco have long forgotten how to make ugly games, so there is a sense of reasoning about the quality of graphic performance to complete a stormy and long.
Now the main thing, that is, about the girls. Or all the same about airplanes? Let's try to combine, the good in the game is a lot of first and second. In Ace Combat 3 there is a story, and very coolly finished; with a bunch of events and a big lot of key characters. Iergo ... hierogg .. in general, kanji, we have not learned to read so far, so most of the amazing extravaganza of this story remains a mystery behind seven seals, because the English version is published without a story component, but it is known that in the East in in the near future unfolding serious confrontation mega-corporations. These offices (UPEO, General Resources LTD., Neucom and Ouroboros) weave the brooms on a planetary scale, being the largest suppliers and manufacturers of everything that you can imagine. And so, deciding to take a break from civilized market relations, they get involved in an armed conflict with the use of combat aviation. All the fuss is due to the prototype of the super-plane Night Raven, developed by Ouroboros and piloted by the girl Rina (the machine looks like YF-21 Galda Bowman of Macross Plus, the pilot is in direct contact with the electronic "brain" of the plane). You understand, this THING will attract anyone ... Missions branch, leading to five different endings.
Strongly, in comparison with the previous series, the management of the aircraft has changed. When the buttons R2 and L2 are pressed, the machine lies on the right and left wings respectively, L1 is responsible for braking, R2 is for afterburner. Real pilots (or at least imagined oneself) are strongly encouraged to use the Dual Shock joystick, whose left handle controls the direction of the aircraft, and the right one allows you to quickly look around in the surrounding area. Virtual cockpit, you know. And so virtual that it happened, flying one kilometer above the ground, convulsively surveying the neighborhood, trying to find at least some signs of the dashboard, the lantern and the chair on which you sit, but you can not see them. As if you control Gandam, and not native MiG. Individuals who are particularly worried about loss of orientation can at any moment look at the map of the locality (the Square button), and on the radar located in the upper left corner of the HUD ("Windshield Indicator", in a bourgeois HUD) in order to restore it safely.
The near future is for that, to quietly interbreed the real with the fantastic. The Namco breeders with truly Michurin craftsmanship and perseverance, worthy of the unforgettable academician Lysenko, povyvyvlili new models of machines, skilfully planting them between existing ones. The most "our" corporation is UPEO, in its park the newest MiG-33 Fulcrum, Su-37 Superflanker and Su-43 Berkut. General Resources LTD. Use the regular F-16XA Sakerfalcon, F-15S / MT Eagle +, F-22C Raptor II; Neucom is armed with mysterious R-311 Remora, R-352 Sepia and R-103 Delphinus # 3; and for Ouroboros flies XFA-3GA Game. Mysterious Night Raven you will take to the sky in one of the last flights.