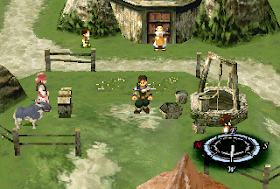 Before swap CD, save state to file, next CD, upload save state file.
Genre: Role-Playing (RPG)
Perspective: Bird's-eye view
Art: Anime / Manga
Interface: Direct Control, Menu Structures, Multiple Units / Characters Control
Vehicular: Mecha / Giant Robot
Setting: Sci-Fi / Futuristic
Published by: Square Electronic Arts L.L.C.
Developed by: Square Co.
Released: 1998
Platform: PlayStation (PSX, PS1)
The game, although its genre is very typical for SquareSoft, is very different from other games of the company. First, instead of the standard 2D rendered backgrounds, the game is completely 3D, with the exception of 2D character models. Secondly, unlike the "bloodless" games of the Final Fantasy series, in Xenogears the blood flows from the participants of the battle and appears in many scenes. The combat system of the game is also seriously different from the Final Fantasy combat system, which has become a kind of canonical for Japanese role-playing games - in this game for victory it is necessary to make combinations of punches of different strength. If the same combination is repeated from battle to battle, the hero can learn the combat skill. Also, in addition to the battles for the people, we will also have to fight for the "gyros" - huge anthropomorphic robots, like mechs from MechWarrior. It should also be noted that the music was written not by Nobuo Uematsu (author of the soundtrack to almost all the series of Final Fantasy), but Yasunori Mitsuda.

Xenogears combines both traditional and innovative elements. First, instead of the standard 2D rendered backgrounds, the game is completely 3D, with the exception of 2D character models. Also, in addition to the battles for the people, we will also have to fight for the "gyros" - huge anthropomorphic robots, like mechs from MechWarrior.

The game uses a turn-based combat system, which was first used in the game Chrono Trigger, and then in several games of the Final Fantasy series. After the beginning of the battle. characters are fighting using melee techniques and ethereal attacks. Also can be used so-called Deathblow, which are performed by a combination of strong, medium and weak shocks. During the attack, he uses Action Point. A strong attack uses 3 points, an average of 2 points, and a weak one. At the beginning of the game, you are given 3 AP per move, then as the character level rises, the AP increases to 6. At some point in the game, you get an additional AP (7 AP per turn ) and after that you will be able to learn and use the Elemental Deathblows. Points AP can be accumulated and used for combo attacks. The maximum possible accumulation of 28 points and then attack the enemy series from the studied Deathblows. However, in the combo series you can only use Deathblows at a cost of no more than 6 AP. Also, characters can use "magic" abilities with which you can heal characters or damage enemies. To use magical abilities, you need Ether Points. Unlike AP, EP does not recover between fights. The magic of most of the characters is called Ether, but some characters use magic with other names. For example, the magic of the Fairy is called 'Chi'. Unlike most other Japanese role-playing games where the main characters specialize in either magic or physical attacks, the main characters of Xenogears can use both equally effectively.

In addition to fighting by the characters themselves, you will also fight inside combat robots called the 'Gears'. The battle in them is very similar to the battle of characters without Gears, but still has a number of features. During the battle, there are three types of attacks - strong, medium, and weak. Each attack increases the Attack Level of Gears, which is then used to carry out more powerful special attacks. Inside Gier, the restriction of AP is replaced by the restriction on the fuel reserve, which is used for each attack, while the stronger the attack, the more fuel is used. There are three levels of normal special Gear attacks (levels 1, 2, and 3 respectively) and one additional 'Infinite' level. When the gir reaches the 'Infinite' attack level, it enters Infinity Mode. The Infinity Mode lasts three turns. While in this mode, you can recharge fuel in large quantities or use the Infinity attack. You will not be able to use the Infinity Mode unless you study the elementary Deathblows (except for Maria Balthasar, who has it automatically, and Chu-Chu), which does not have attack levels per se. To achieve infinity mode, the character must raise his Attack Level to three and continue using simple attacks (the higher the character level, the easier it is to go to infinity mode). Gyres can also activate the Boosters, letter Accelerators which increases the speed of their attacks in return for large fuel consumption. The Special Option menu item allows you to restore the HP level (provided that you have the appropriate parts installed) and use special attacks due to the large amount of fuel. When Gere finishes fuel, he can not attack, use special abilities, or Booster. However, you can use the ability of Charge (restores fuel) and use etheric abilities. The main characters can buy fuel for Gier, spare parts, and updates in the store..

The game originates on the continent of Ignace, which is located in the northern hemisphere. For several hundred years, the most bloody wars between the two countries flared up here. In the north of the continent is the Kislev Empire. in the south, in the midst of deserts, the kingdom of Avech stretches. The war went on for so long that people have already forgotten its cause, remembering only the endless circle of hatred and tragedy. But soon a turning point was to come. This was due to Athos, an institution that stands guard over world culture and also supervises the repair of everything that is extracted from the ruins of an ancient civilization. Simultaneously, both countries began excavating and restoring the finds with the help of Ethos began to build up military power. The "arms race" has gone. The various types of weapons discovered during the excavations greatly changed the form of the battles. The outcome of the confrontations between the two states was no longer solved in the man-man fight, but with the fights of the "Gear", the giant humanoid war machines that were found in the depths of the ruins. In the end, the Kislev Empire began to dominate. The decisive factor was the fact that more "resources" were buried on the territory of the Empire. But suddenly a mysterious military fleet appeared on the continent of Ignace. Called 'Gebler' this organization decided to contact Ava. With the help of Gebler, Ave managed to get out of the hopeless situation and even go on the offensive. With the help of support, they began to seize one territory of Kisleva after another without slowing down their intervention for a second.
In more detail, the game universe Xenogears is described in the book Xenogears Perfect Works, which was published only in Japanese. The book was created by the now non-existent company DigiCube, and described the history of the world of Xenogears from the moment the Zohar was found until the game began.

Attitude of the public

Xenogears received a rating of 91% on Game Rankings, and it is included in the 15 best games on the PlayStation. However, many criticize the game for the style of filing the story on the second disc. Where you just fight with the bosses and watch the dialogue of the characters. There is unconfirmed data that the style of filing the game on the second disc was due to the fact that the developers just hurried to make the game by the due date.

Officially Xenogears had no continuation. However, when Monolith Soft first announced Xenosaga, it became known that this would be the prehistory of the series. Tetsuya Takahashi (director and scriptwriter of Xenogears and Xenosaga), noted that "given our relationship with Square, it will be difficult to tell whether this is a back story, or a direct continuation." All 3 parts of the game Xenosaga occur in the same universe as Xenogears and are combined only by the storyline, although the names and terms overlap.
‹
›
Home
View web version