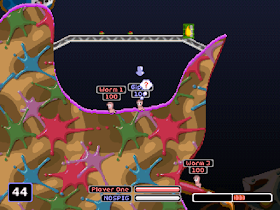 Genre: Strategy / Tactics
Perspective: Side view
Visual: 2D scrolling
Pacing: Turn-based
Gameplay: Artillery
Interface: Direct Control, Multiple Units / Characters Control
Narrative: Comedy, War
Published by: MicroProse Software
Developed by: Team17 Software Limited
Released: 1999
Platforms: PlayStation (PSX, PS1), Nintendo 64 (N64), Game Boy Color (GBC)
This is the third sequel to the series of Worms games that have become classics. You are invited to play the role of worm-fighters in a military company. What is it like the famous game Lemmenga (not in content, but in appearance). The new sequel contains many new game elements and features. From two to four teams are fighting with each other, in a funny fragile environment. Pleasure provides a large number of weapons and serious strategies. You can create your own world. All of them are painted with high resolution. Graphics and sound at a good level. There are six game modes. In a word you do not have to be bored.
‹
›
Home
View web version