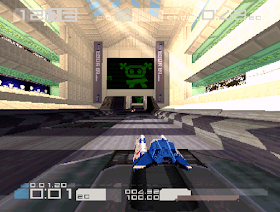 Genre: Action, Racing / Driving
Perspective: 1st-person, Behind view
Vehicular: Hovercraft, Track Racing
Setting: Sci-Fi / Futuristic
Published by: Sony Computer Entertainment Europe Ltd.
Developed by: Psygnosis Limited
Released: 2000
Platform: PlayStation (PSX, PS1)
This is one of the versions of the famous fighting racing game, in which you will see 8 completely new tracks, and, in addition to the five that existed in the previous version, 3 new racing teams. Now you have 12 weapons. In Wipeout 3, most of the weapons from Wipeout 2097 passed. Some weapons have been altered. The projectiles are now available in two at once. The best of the new weapons: Flaim Trail - the release of fire from the tail of your device; Force Wall - destroys the pursuers; Cloak - makes you invisible for a while. Among the modes you will find both arcade, and race with time, and the tournament, and one-on-one races in split screen mode. Wipeout 3 supports a cable for linking two prefixes. In addition to all of the above, the developers managed to give Wipeout 3 a completely new look, preserving the essence of the game. Teams of riders remained the same, but each now has a lot of individual traits and is very different from the others. In addition to the structural differences between race cars, each team received its unique weapon. The landscapes now have a clearly industrial tint, with multi-level platforms, springboards and an impressive, spiral downward. Graphics Wipeout 3 above any criticism. The new weapon produces fantastic special effects, and the problems that were before with the appearance of objects on the background no longer exist. Now you can play at the highest resolution, even in split screen mode. Management was very good and in the first versions of the game, and given that Wipeout 3 supports the analog standard Dual Shock, everything has become even more natural. The additional levels of control that you get with an analog controller are simply amazing. Among other things, the game has a new hyper-accelerator, which will allow players to get significant acceleration due to low energy costs. The music in Wipeout 3 is also cool.
‹
›
Home
View web version