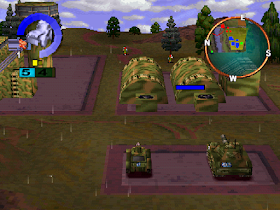 Genre: Action, Strategy / Tactics
Perspective: Behind view
Setting: Sci-Fi / Futuristic
Published by: MGM Interactive
Developed by: Interactive Studios Ltd.
Released: 1998
Platform: PlayStation (PSX, PS1)
Although the game for the console and PC contains the same campaign and content, but the gameplay they differ. So, for the version of PlayStation is a tactical shooter with elements of driving, while the version for PC is a real-time strategy.
The essence of the game is the management of military equipment (at the same time you can directly take control of only one unit) and perform tasks by completely or selectively destroying enemy troops with some variations. The name of the game is a reference to the movie WarGames in 1983, but the game and the movie themselves have little in common.
The game features two warring parties: NORAD and W.O.P.R., who are fighting full-scale war against each other (in the movie W.O.P.R. is a supercomputer installed at the command post NORAD, but nothing goes to get him out of control). NORAD has at its disposal "human" troops (infantry, armored vehicles, aviation), while the troops of W.O.P.R. are robotic devices.

The player controls a separate unit of equipment. Each type of technology has a basic and additional weapon (the second can be replaced by a special ability, for example, camouflage). The ammunition of additional weapons is limited and measured either in units or in percent. Replenishment of ammunition and repairs are made by calling a transport helicopter.
Also available is a quick menu, in which you can order the unit under control to return to the base, call all or a certain unit, and also call a transport helicopter if there is a computer or command center nearby.
On the site of destroyed enemy equipment or buildings, various bonuses may appear, such as a shield (drained over time and when hit by a player), increased damage caused by the player, repair, replenishment of ammunition.

Variants of modes are a single campaign for one of two sides, cooperative passage together with another player or a duel.

Each of the campaigns consists of 15 missions, which become more difficult as you progress. Before each of the missions, a loading screen is displayed, combined with a briefing, where you can read the premises for the mission, its general purpose, the list of selected equipment, and the first tactical task. In each mission there may be several tasks that are activated in order, after the previous one, and which can be viewed on the same screen. The list of provided equipment after the start of the mission is replaced by a certificate, where you can read a description of all types of equipment and buildings.
Mission tasks are of the following types:

These modes are provided for playing together. The screen is divided diagonally, each player is given his own mini-map.
Cooperative passage of the campaign does not change the mission.
In the duel mode, each player receives one of the bases located in opposite corners of the card. The goal of the match depends on the mode of the duel:
In the campaign mode, there is a time factor. The scale, stylized by DEFCON, passes over time from the status of DEFCON 5 to the status of DEFCON 1. The scale shifts in the opposite direction when destroying enemy equipment and buildings - thus, the game assumes active player actions. If during a certain time the status remains at the DEFCON 1 mark, bombers fly over the player's troops and destroy them, which leads to defeat.

In the brackets after the title, the main and additional weapons are indicated.