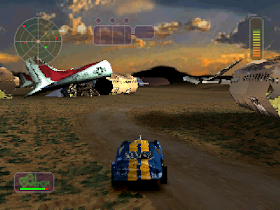 Genre: Action, Racing / Driving
Perspective: 3rd-person
Gameplay: Shooter, Vehicular Combat Simulator
Published by: Activision
Developed by: Luxoflux Corp.
Released: 1998
Platform: PlayStation (PSX, PS1)
One of the best games of the genre of vehicular combat for Sony PlayStation. The game is the first part in a series of games Vigilante 8. The plot of the game is based on an alternative story, which could be. The game takes place in the US in 1975 during the global oil crisis. The United States is on the brink of economic collapse. Strikes and riots are taking place throughout the country. All forces are tightened to the protection of cities. At that time, nobody thought about the suburbs and other territories. Crime is flourishing there. The organization known as OMAR (Oil Monopoly Alliance Regime) decides to monopolize the world market of oil trade. The US remained the last country that stood in their way. OMAR was prepared to do anything to bring the US to its knees. To do this, they hire Sid Burn, a professional terrorist. It should bring down the US economy. Sid organizes the gang and calls it "Coyotes". Their goal is the destruction of oil refineries, the destruction of dams and other objects vital for the economy. Due to the fact that there was always lawlessness, some citizens began to take the law into their own hands. He was led by a trucker named Convoy. They called themselves "Vigilantes".
By coincidence, both gangs get their hands on a new weapon, developed on the basis of extraterrestrial technology. After that, throughout the US bloody car clashes occur. Approximately here and the game begins.
At the beginning of the level, the machine of the player is armed only with the Mosquito machine gun. The player can additionally pick up three more weapons. Each machine has its own unique super weapon, however, and the machines themselves are unique, with their characteristics. Almost all objects on levels are destructible, with some of them you can interact. As the game progresses, new players and levels will open up. Unfortunately, the game can not be played together. This will be implemented only in the second part of the game. In the game, with the help of video clips, the story of each character is told. I recommend this game to everyone.
The second part of the game was called Vigilante 8: 2nd Offense, the game was even better.
The name of the game Vigilante 8, is based in part on the designation of the V8 engine.
‹
›
Home
View web version