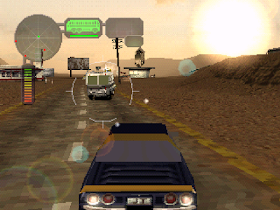 Genre: Racing / Driving
Perspective: Behind view
Gameplay: Arcade, Shooter
Published by: Activision
Developed by: Luxoflux Corp.
Released: 1999
Platform: PlayStation (PSX, PS1)
When the first part of this game came out, few could immediately assess what really was good. It's likely that the whole thing was that the first game in this genre, which was not so popular, the shooter Twisted Metal, really did not appeal to everyone. By and large, most experts treated it with a certain contempt, calling it Mortal Kombat on wheels. In some ways they were, of course, right, since a more unfinished game that has come out solely on its controversial originality and outright pop music, on the PlayStation, probably will not find. And it was thanks to this that after the release of Twisted Metal and especially its continuation on the entire genre of shoot-shooters, a fat cross was placed.
But it was not there. The company Activision quickly realized that in fact the genre itself, the ancestor of which was Twisted Metal, is not to blame for anything. Having weighed all the pros and cons, she decided to take all the best moments of TM, clean them up, and develop to an acceptable level and release their own version of this popular game that could take its rightful place in the market. And let the first time from Activision with the latter not everything turned out (changing the existing public opinion - it's very difficult), we have every reason to assert that the second time Vigilante 8 can still break through to the heights of world charts.
The main reason that we are confident in the success of Vigilante 8: Second Offence is that the company Activision and specifically the Luxoflux team, in contrast to their competitors, presented us with not just another slightly improved version of their old game, but a full-fledged continuation, in which from under the eyes of designers and programmers did not slip any, albeit seemingly insignificant, detail.
To begin with, in a new game from Luxoflux, which is made on a slightly improved "engine" from Vigilante 8, you will be provided for the destruction of as many as 12 giant arenas located in different parts of the United States of America. These arenas, more like giant levels, will be somewhat larger in size than in the original, and this despite the fact that all the buildings and buildings located on them can be leveled to the ground. Moreover, in spite of the big load of the PlayStation processor for the calculation of all these damages, the graphical side of the game is still pleasing to the eye. And although we did not get a huge jump in graphics quality, it's also nice to look at everything happening on the screen, just like the first time.
In Vigilante 8: Second Offense, 17 types of "cars" will take part, including such exotic ones as garbage truck and spaceship, as well as 18 different heroes, 10 of which you will see for the first time.
However, the most changes touched the gameplay itself. Firstly, in Vigilante 8: Second Offence, you can find at once 3 different modes for playing against the computer: classic Arcade (that is, directly advanced Twisted Metal), Quest (a sequential set of missions connected by a plot), and Survival for survival - the longer you stay alive - the better). Secondly, in the event that your friend joins you, then you can not only chase each other around the arena, but also go through the Quest mode together or together clean up some arena from the enemies.
In general, even if you somehow missed the first part of Vigilante 8 and could not appreciate all the advantages of the series, then I really recommend playing in Second Offence.
‹
›
Home
View web version