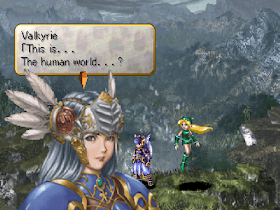 Before swap CD, save state to file, next CD, upload save state file.
Genre: Role-Playing (RPG)
Perspective: 3rd-person, Side view
Pacing: Turn-based
Published by: Enix America Inc.
Developed by: tri-Ace Inc.
Released: 2000
Platform: PlayStation (PSX, PS1)
Retell the storyline does not make sense - it hides exactly half of the impressions received at the initial stage. However, from the very beginning it becomes clear that without knowing the events of the previous part, the continuation of Valkyrie Profile is unlikely to be a revelation for someone. There is an interesting and strenuous story, dragging along from the very first shots, and an incredibly beautiful visual part, coupled with competent direction of the videos. One scene is replaced by another, after it the third can hardly follow, and now the princess with a split personality is left to herself. But all this to the person "from the street" can seem a set of skillfully matched cliches.

Much better is the situation with the combat system - no matter how diligently they were given explanations to it, in practice only practice helps. To its passage here there is a strong stimulus or rather a necessity: the fixed team of the main character does not exist and never will. In the course of the narrative, different characters join her, but sooner or later either they will perish or scatter on their business. The Princess will have nothing left but to ask for help from the souls of yesterday's warriors imprisoned in various artifacts. Although there was a little trick here: in the world of Valkyrie Profile, as they reach a certain level of development of the heroes, they have to be released. Will they meet again, and will they again agree to join the detachment? It is not known.
Coming into battle with numerous opponents makes not just a vital necessity, but also a certain "transplant" element - complete concentration and ingenuity, without which it is impossible to survive in the world of Silmeria. In words, the scheme is extremely simple: all battles take place in real time on a separate field, where the team is transferred by a wave of an invisible hand; Each character is allocated one button, and the enemies move only simultaneously with the characters. The plus of this system is that the battles look extremely effective, since all the characters can attack at once, and the battle itself is never delayed. The exception is unless the bosses, but at such times everything is decided by the correct selection of characters and competent tactics. There are no impassable or too complex battles in sight.

Self-restraint as a virtue

Despite the fact that in the XXI century, employees of tri-Ace continue to be wary of innovations and fashion trends. In Silmeria, the world model, together with its inhabitants, though it is executed in the usual three dimensions, has a lot of restrictions. Even you can move only in the plane, although in some places there are transitions to other sections located above or below the main one. On them the main heroine gets, freezing opponents and using the souls left after them as steps. Of such simple tasks and there are wanderings in the mines and forests - aimlessly rushing from the left edge of the screen to the right will not have to.
The local scenery does not have unnecessary or unnecessary places, as there are no "acceptable" or "nice" panoramas - the artistic part causes only delight and admiration. Sometimes one is surprised at what kind of picture a long-obsolete technology console can give out, and how the projects of old hardening stand out before the representatives of the "new wave". Each corner of each location wants to explore thoroughly, letting the eyes enjoy the work of the artists.
However, everything has to pay its price, and in this case, "time" is the "currency". The story of Odin and his Valkyries absorbs whole weekends and the next working week, forcing again and again to "pumping" new heroes. To look and lay aside on the shelf will not work at all desire, even if for the sake of it it is necessary to refuse other entertainments. In this regard, it will be slightly easier for those who are not familiar with the original - they will find the game far less attractive. However, with the lack of previous experience it is just possible and necessary to reconcile. Moreover, this is just the rare case when it is even useful to eliminate one's own illiteracy.
The work of artists and designers of tri-Ace causes entirely positive emotions. Only when the image is focused on a specific character, the background behind it seems too blurry. But this quickly ceases to pay attention. Battle melodies inspire a desire to buy a soundtrack, and perfectly matched voices of actors unfolding on the screen plays - time after time to review the dialogues. On the button on the character - it's easier to think of is impossible. However, to make the team work together, you have to dig into the settings. Valkyrie Profile 2 in appearance - a classic representative of the genre of Japanese role-playing games, with all the characteristic moments familiar to everyone who has ever encountered similar projects. However, in depth and excitement, he is unlikely to find equal. Viewers who watched the development of events last time should immediately say goodbye to free time - Silmeria will devour it whole. All the rest will have a little more difficult, but worse from this saga of the Valkyries just will not.
‹
›
Home
View web version