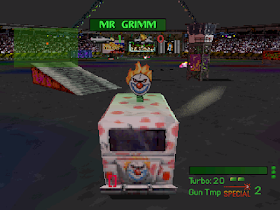 Genre: Racing / Driving
Perspective: 1st-person, Behind view
Gameplay: Arcade, Vehicular Combat Simulator
Vehicular: Automobile
Published by: Sony Computer Entertainment of America
Developed by: SingleTrac Entertainment Technologies
Released: 1995
Platform: PlayStation (PSX, PS1)
Twisted Metal - the first game that started a series of maniac riders ruthlessly destroying everyone in a row in the hope of winning. Rather, it's not even a race, but a war on cars, in which you have to move all the time and destroy everything around. Your car (which you can choose from a fairly large number) is equipped with guns and machine guns, like the machines of your opponents. The battle goes on different levels of difficulty (you can also choose), and if the first level against the opponent in the arena of the stadium is simple enough, then in the future the number of enemies will increase incredibly. You will face battles in the streets of cities and even on the roof of a skyscraper. The game is very user friendly. If you have passed the level, then you are informed of its code, which greatly simplifies the game. Although the graphics are not very detailed, but due to this the game is very dynamic and does not "slow down" anywhere, which is typical for high-speed games with detailed graphics. You can choose and plan to monitor all of this meat grinder: one from the cockpit or two different plans from the top. In general, the game is very original and dynamic - you will like it!
‹
›
Home
View web version