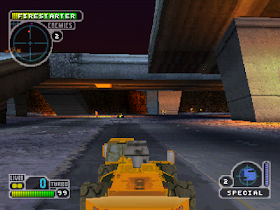 Genre: Racing / Driving
Perspective: Behind view
Gameplay: Arcade, Vehicular Combat Simulator
Vehicular: Automobile
Setting: Sci-Fi / Futuristic
Published by: 989 Studios
Developed by: 989 Studios
Released: 1998
Platform: PlayStation (PSX, PS1)
Although the game clearly did not reach the level of the games of 1998, it was a good success. The game takes place in 2008 two years after the events in Twisted Metal 2. During this time, a lot has happened in the world. Now the game takes place all over the world. Players will have to fight in the most unexpected places, for example, at the north pole next to the Santa Claus workshop. The player has a choice of more than twenty vehicles. Each vehicle is unique and has its own characteristics and its own special weapons. The main prize in the game is still the cherished desire of the player, which will perform the mysterious Calypso.
‹
›
Home
View web version