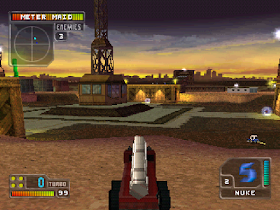 Genre: Racing / Driving
Perspective: Behind view
Gameplay: Arcade, Vehicular Combat Simulator
Vehicular: Automobile
Setting: Post-Apocalyptic
Published by: 989 Studios
Developed by: 989 Studios
Released: 1999
Platform: PlayStation (PSX, PS1)
The Twisted Metal series has enjoyed a steady over-popularity for many years. Still, a tempting idea - to turn the good old genre of racing into a simulator of slaughter. What is the start, what is the finish, why should someone overtake, if you can put a homing missile into the enemy, fry from a flamethrower, inject a sharp and burning laser beam. You can turn cars into a pile of melted scrap metal, controlled by a stupid computer, or you can fry, blow up, blow up a best friend's machine - all games of this series are designed for at least two players - the screen is divided into halves, and in each of them a fierce battle starts. The variety of machines and bizarre self-propelled mechanisms designed for any, even the most perverted taste, also sold the games of the series of additional interest.
By the way, a few words about what you have to ride in this game - the machine park this time will be more than colorful. You have to ride and on huge trucks, and on garbage vans and even on a bulky tank of the First World. Weapons in the game will also be more than enough, again for every taste.
One of the undoubted highlights of the series is the multiplayer mode. This mode, the creators of the fourth part also paid a lot of attention - the game supports such a useful device as a Multi-Tap - a contraption that allows you to connect to your console immediately four joysticks. Multi-Tap support was implemented in the third part, but in the fourth part developers are going to hone the multi-user mode to the full perfection.
‹
›
Home
View web version