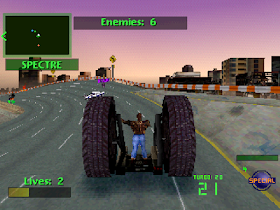 Genre: Racing / Driving
Perspective: Behind view
Gameplay: Arcade, Vehicular Combat Simulator
Vehicular: Automobile
Setting: Post-Apocalyptic
Published by: Sony Computer Entertainment of America
Developed by: Sony Interactive Studios America, SingleTrac Entertainment Technologies
Released: 1996
Platform: PlayStation (PSX, PS1)
This is the second game of the series, demonstrating the excellent 3D capabilities of the PlayStation system. Machines and mechanisms are twice as large and (as it seems) two times more drawn; look great and cityscapes. The game mode for 2 players becomes extraordinarily fascinating; Less time is spent driving around in circles, doing nothing. The vehicles are well equipped; even if the enemy is out of sight, you can follow it with the help of instruments. In driving, in addition to the old favorites, there are a bulldozer, a racing car, a hearse and a guy named Axel on a wagon with two huge wheels, armed to the teeth. The task (as before) is extremely clear - to destroy all rivals, using such new types of weapons as bombs with a remote fuse, napalm, ricochet bombs and detachable projectiles.
‹
›
Home
View web version