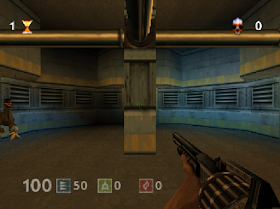 Genre: Action, FPS
Perspective: 1st-person
Gameplay: Shooter
Setting: Sci-Fi / Futuristic
Published by: Acclaim Entertainment
Developed by: Acclaim Studios Austin
Released: 1999
Platform: Nintendo 64 (N64)
One of the first series about the combat adventures of an Indian with a non-Indian name of the Turks and his companions. Already here are traced the makings of a good game, which were then fully realized in the second and especially the third parts. The game is a classic example of 3D action, with an abundance of diverse weapons, cunning enemies (including dinosaurs) and narrow corridors where a bloody fight can not be avoided. The game is largely focused on several players, but it is also suitable for single-player games.
‹
›
Home
View web version