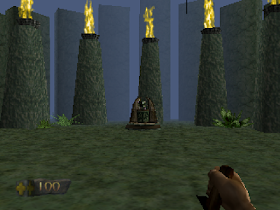 Genre: Action, FPS
Perspective: 1st-person
Gameplay: Shooter
Published by: Acclaim Entertainment
Developed by: Iguana Entertainment
Released: 1997
Platform: Nintendo 64 (N64)
The first part of an excellent 3D action. Already here the creators of the game have set such a high level that it could be surpassed only in other parts of the adventure of the Turok Indian. Graphics and sound are just great. The Turk should find special keys, moving through the levels and fighting enemies in the face of unfriendly warriors and bloodthirsty lizards. To begin with, he only has a knife and an onion, but there are scattered other weapons and ammunition to him - pistols, hard disks and so on. There is an additional quest - the collection of parts for Chronoceptor, superweapon, which is useful in a fight with the main boss. The gameplay is very high quality and live.
Turok - Dinosaur Hunter - you were handed a robe passed and from now on you became a Defender of the Earth. Now, you're a Dinosaur Hunter. Save our planet from the terrible destruction of the wild creatures. The extremely successful game for Nintendo 64 was later ported to other consoles and on the PC. Technologically, the game shocked everyone. Graphics is just a masterpiece.
‹
›
Home
View web version