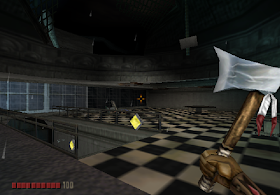 Genre: Action, FPS
Perspective: 1st-person
Gameplay: Shooter
Setting: Sci-Fi / Futuristic
Published by: Acclaim Entertainment
Developed by: Acclaim Studios Austin
Released: 2000
Platform: Nintendo 64 (N64)
Super 3D action. One of the best games for Nintendo64, regardless of the genre. Two heroes of Indian origin - teenager Joseph and the young squaw Danny, with the support of the mysterious assistant Edon, go to a difficult fight with Oblivion and his minions. The game is divided into 5 parts, each of which ends with the boss. The heroes have their own way of passing separate segments, and also they have unique types of weapons, among which there are such as a cerebral cannon and a vampire pistol. There is in the game and a separate companion quest - in each of the parts there is one piece of super weapons PSG, which carries a completely deadly force. Graphics and music at the highest level. Summarizing all this, you can only advise you to play this cool game and see everything with your own eyes. And remember that unlike Turok 2, 100 collected Life Force now add not 1 life, but increase by 10 points maximum of vital energy.
Turok 3 - Shadow of Oblivion - since time immemorial, a wild cosmic creature named Oblivion exists only to devour everything in its path. Two new warrior game Turok, Danielle and Joseph Fireside must face this evil. The legacy of Turok and all of humanity depends on them. Join the legacy. More than 24 modernized weapons, more than 40 new and original enemies! Intensive multiplayer action - more than 8 game options and 48 cards!
‹
›
Home
View web version