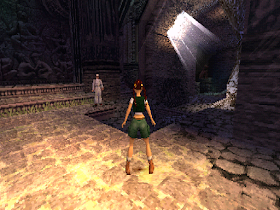 Genre: Action
Perspective: Behind view
Gameplay: Platform, Puzzle elements
Published by: Eidos Interactive
Developed by: Core Design Ltd.
Released: 1999
Platform: PlayStation (PSX, PS1)
At the beginning of the game young Lara, accompanied by his mentor - Professor Werner Von Croy, goes to Cambodia, where he hopes to find the mysterious Iris artifact. However, as a result of the accident, Lara loses her mentor, and in order to save her own life, she has to give up her search.
The next stage of the game takes the player to 15 years in advance, to Egypt, where Lara Croft discovers an ancient tomb in which the once formidable Egyptian god Set was imprisoned. She inadvertently opens the tomb and releases the spirit of the deity, resulting in being dragged into a deadly race over time, as it is she who will return the spirit of Seth back to the grave before the Apocalypse comes on Earth.
In his search Lara will visit various parts of Egypt and visit Pharos, Temple of Isis, Temple of Poseidon and Cleopatra's Palaces.

There are several innovations in the game. Lara has new opportunities: now she can use hanging ropes to get over the abysses and dips, can climb up and down the vertical poles, and, scrambling along the ledges, bend the corners. Lara's model was improved. Compared with previous games of the series, it looks more smoothed and elaborate. This was achieved through the addition of moving parts in the junction of the limbs, and thus give the main character a more realistic look. In this game, Lara has the ability to return to previous levels, since some of them can be played in non-linear order and different routes.
Instead of the previously used ring-shaped inventory, now inventory has a linear view, where all items are arranged in the form of a horizontal line. In the lower left corner of the inventory screen there is a compass, but it is only needed to activate the codes or to help in solving the puzzles at the Citadel level. In addition, some items in the inventory can be combined among themselves, for example, to combine weapons with a laser sight.
In the arsenal of Lara appeared a new weapon - a revolver. Although the revolver becomes available to the player only at the end of the game, it is a very powerful and effective weapon to stop the enemy. In combination with a laser sight, a player can use it to shoot distant targets. Laser sight also can be equipped with a crossbow in order to further detail the visual design.
The game has 38 levels.

Unlike previous games in which the plot threw the player into the most diverse points of the globe, in this game Lara's journey lies only through two countries - Cambodia and Egypt.

The initial level of the game. In 1984 [1] Lara, along with Professor Werner Von Croy, went to Cambodia in search of the Iris artifact. This stage serves as a training level for the player, unlike previous games, where the role of the training level was performed by Lara's mansion. In Cambodia, the player also learns about the rivalry between Lara and Von Croy.
The stage consists of two levels: "Angkor Wat" and "Race for Iris".

Valley of the Kings

The Temple of Karnak

Lara arrives at the Temple of Karnak to find the grave of Semerchet and find out why Seth was buried in the Valley of the Kings. Von Croy observes her searches and when Lara finds the grave of Semerchet, she takes the Amulet of Horus from her, and then disappears. Later Lara learns that Von Kroy went to Alexandria in order to find the armor of Horus.
This stage consists of six levels: "Karnak Temple", "Great Hypostyle Hall", "Sacred Lake", "The Tomb of Semerchet", "The Guardian of Semerchet" and "The Railway through the Desert".

Lara meets with Jean-Yves to discuss where the armor of Horus can be. The armor, divided into parts, rests in ruins on the coast of Alexandria: in catacombs, in a hidden Temple built in honor of Poseidon, inside an ancient library that has long been destroyed, and also in the Palaces of Cleopatra.
The stage consists of eight levels: Alexandria, Coastal Ruins, Catacombs, Temple of Poseidon, Lost Library, Demetrius Hall, Temple of Isis and Palaces of Cleopatra.

Learning that Von Croy was kidnapped by Jean-Yves to force Lara to give him the armor of Horus, Lara arrives in Cairo and heads to the ancient Citadel. Along the way, she learns that something is inexplicable at the Citadel's gates. Once in the Citadel, Lara finds out that Seth's spirit was taken over by Werner Von Croy. Later, she manages to regain the magical Amulet of Horus.
The stage consists of six levels: "City of the Dead", "Trenches", "Chamber of Tulun", "Street Bazaar", "Gate of the Citadel" and "Citadel".

Lara's path lies in Giza to awaken the god Horus, the only one who is able to defeat Seth. Von Kroy is also sent to Giza in order to prevent Lara, but she manages to get ahead of the professor. Lara reaches the Great Pyramid, penetrates into the Temple of Horus and with the help of an amulet tries to summon the God of Heaven, however, Seth suddenly interferes in her plans.
The final stage of the game includes ten levels: "Sphinx Complex", "Under the Sphinx", "Menkaure Pyramid", "Inside the Pyramid of Menkaure", "Mastaba", "The Great Pyramid", "Inside the Great Pyramid" and "Temple of Horus" ( which, in turn, is divided into two levels).

The central character of the game. Archaeologist. Travels the world exploring ancient tombs and ruins, where it is often littered with various dangers, ranging from deadly traps and mechanisms, and ending with hostile competitors, wild animals, mythical creatures and supernatural creatures.

World-renowned archaeologist and researcher, as well as a mentor of the young Lara Croft. He was born in Vienna in 1940. When Laré turned 16, Professor Von Croy took her with him to Angkor Wat, in Cambodia. The purpose of the trip was to teach Lara basic archaeological skills, as well as instill in her respect for the past. Fifteen years later their paths crossed again. This time - in an attempt to challenge the right to the sacred Amulet of Horus from the tomb of Seth. In the process of playing, Von Croy's mind is dominated by the god Seth, using the professors as an object to achieve his goals.

Archaeologist and friend of Lara, whose knowledge of Ancient Egypt is a great help for her.

The conductor hired by Lara to aid in the exploration of the Seth's tomb. Lara later finds out that he works for Werner von Kroe. She lies in wait for Ahmed near the tomb of Semerchet in Karnak and tries to find out where Von Kroy is heading. Ahmed points to Alexandria ...

Secondary character. Appears in several scenes in Cairo. Heavy wounded, he explains Lara how to cope with a huge fire-breathing creature guarding the entrance to the Citadel.

According to the plot - the ancient Egyptian God of Chaos and Destruction, imprudently released by Lara. His spirit is reborn in the body of Werner Von Croy, in order to prevent Lara from bringing back her enemy, Horus.

According to the game - the ancient Egyptian God of Light and Heaven, imprisoned Seth, and sealed his grave. According to the story, Gore must rise again, dressed in powerful armor and armed with a magic amulet, in order to fight Seth and re-imprison him in the tomb, now forever.
‹
›
Home
View web version