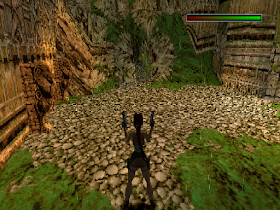 Genre: Action
Perspective: Behind view
Gameplay: Platform, Puzzle elements
Published by: Eidos Interactive
Developed by: Core Design Ltd.
Released: 1998
Platform: PlayStation (PSX, PS1)
The graphic engine used for Tomb Raider III is different than the one used for the previous two deliveries, it is faster and more dynamic, the textures are more elaborate, therefore, the landscapes are more real, the semitransparencies, together with the effects of light multicolored to the exhibition to the water, the dynamic lights that adapt to the zone in which you situate yourself, penetrate us more in the scenes. Lara has also had a very noticeable graphic improvement, with the increase of polygons, also includes new movements, such as, the ability to walk on his knees, move forward from a roof, shoot after a race, and the possibility of sprinting. There are also new graphic details like the smoke from the pistols after firing and the caps that jump with each shot.
In the section of weapons, they are added to the already classic saga, an improved grenade launcher, a rocket launcher, and the Desert Eagle pistol. The M16 Rifle is replaced in this edition by the MP5. And as for the vehicles, as a novelty, Lara can use a "quad", a "kayak", an underwater propulsion unit, a boat and a mine wagon. We also encounter new dangers such as quicksand, piranhas and snakes that poison us with their sting, Lara needing to take a kit to neutralize the poison.
The objective of the game remains unchanged, although the Tomb Raider III may have fewer graves to explore than previous games. Most levels are placed in a more modern environment, and this edition introduces a new element of the game, the infiltration, the possibility of stepping into places with stealth without being seen. For example, in the adventure of the Nevada, it is sometimes preferable not to face the guards and pass without being seen.
Unlike previous deliveries, where you could save the game anywhere in the game, Tomb Raider III inserts the Save Part Crystal, which as the name implies is necessary to save the games, once for each crystal obtained. For some reason, in the PC version you can save the game at any time and the crystals will serve to restore life.
Depending on the level we are in, Lara's clothes vary from, polar fleece and military pants, shorts and top, as well as a black leather suit and the classic suit. let's not forget it's an adventure game.

The initial place of action is India. Here, during his usual raid on the monuments of the past, Lara finds a strange artifact - the stone of Infada Stone (English Infada Stone) and meets scientist Mark Willard, who tells her the history of the artifact. The Infodium stone is part of an ancient Polynesian cult whose object of worship was a meteorite that fell in the Antarctic and provoked a complete climate change on the planet. Later, the expedition of Charles Darwin discovers in the Antarctic an ancient sanctuary and five fragments of a Polynesian meteorite, which they take with them to the Old World. After a while, together with the expedition members, the fragments of the meteorite scattered all over the world, and the mysterious find in the Antarctic was forgotten. Today, Willard and his company RX Tech manage to discover the sanctuary, however, its most important parts - five fragments of the meteorite - are missing. The search for the remaining four artifacts (in addition to the already discovered Infodium stone) and become the next task for Lara.
‹
›
Home
View web version