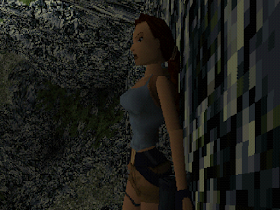 According to legend, the Chinese emperor pierced his heart mythical dagger of Xian during the battle and turned into a golden fire-breathing dragon. During the battle with the forces of Tibetan monks, the emperor perishes by imprudence, allowing the monk to pull the dagger from the heart of the dragon. The emperor died, and the dagger was returned to the Temple of Xian deep under the Great Wall of China.
In 1997, during a routine archaeological raid, Lara Croft discovers tightly locked door, and this time it attacks the rebellious people. From a conversation with him, Lara discovers the legend of the dagger, as well as the leader of the mafia Venetian Marco Bartoli, who is also a member of the cult of worshiping the power of the Dagger. Lara goes to Venice, he is a secret place mafia and tries to follow Bartoli in the cargo hold of his personal plane, but it stuns one of the bandits. The plane arrives on the oil platform owned by Bartoli. On the platform, Lara escapes from captivity and finds the monk in the near-death state near the submarine diving zone. He says that the door to the temple of Xi'an will open the amulet Taleon, which is kept in the Ice Palace under the monastery. But the entrance to the Palace is sealed by monks locked in the amulet of Seraph. Seraph was transported on the liner "Maria Doria", sunken somewhere near. Lara finds the liner and finds Seraph on the liner deck. She returns to the station, steals the plane and flies to Tibet. There, with the help of monks, she finds Taleon and goes back to China. Opening the door, Lara enters the ancient Temple of Xian.
In the temple, she watches the members of the dragon cult and personally Bartoli, piercing his heart with a dagger, stored in the sacrificial room. Lara follows them and falls into a special dimension-the Floating Islands-the refuge of the dragon. There Lara finds Bartoli, who turned into a golden dragon. She barely defeats him, pulling the dagger from the dragon's chest. The dragon dies, the cave begins to collapse. Lara manages to get out, but loses consciousness. A few hours later she woke up at the burning site of the Chinese wall. In his estate, Lara looks at the dagger, but at this time the remains of Bartoli's people attack the house. Lara fights off enemies and goes into the shower room.

Tomb Raider II has an expanded arsenal of weapons. The pistols with unlimited ammunition, the shotgun and the Uzis are back in the game. The Magnums were swapped for automatic pistols. Added were the M16, the harpoon, which is used under water in particular, and the grenade launcher, the most powerful weapon. In addition, there are also nameless human opponents; In Tomb Raider 1, all human opponents had a certain identity in the game, while the second part is almost only henchmen to fight. In Tomb Raider II different vehicles can be used. In certain levels you can drive motorboats and snowmobiles. Both vehicles also have a turbo drive. With the snowmobile opponents can be run over. Here there are snowmobiles with turbo drive and snowmobiles with machine guns, but without turbo drive.
The appearance of the game character has been changed. Lara Croft has a long braid and a not too much pulled over bust. In different places Lara changes her clothes. In the underwater levels she wears a wetsuit, in the mountain levels a bomber jacket, and in the last level a blue nightgown.
A new skill was given to Lara Croft in relation to its predecessor. The character can now also play a role in the jump.
Like its predecessor, puzzles have to be solved in the game and items must be collected, which will be used later in the game. Most levels contain hidden spaces where you can find rewards in the form of weapons, ammo, or artifacts (small stone, jade, and gold dragons). If all dragons are found in one level, you will receive a large number of ammunition, medipacks (healing packages) and (not yet recorded) weapons.
While in Part 1 the atmosphere stayed the same from level to level, more variety came into play in Tomb Raider II. There are often changing locations: Exotic lands, monasteries, sunken wrecks and fallen underworlds.
‹
›
Home
View web version