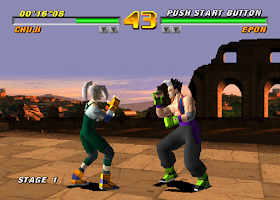 Genre: Action, Role-Playing (RPG)
Perspective: 3rd-person
Gameplay: Fighting
Setting: Sci-Fi / Futuristic
Published by: Square Co.
Developed by: Dream Factory Co.
Released: 1997
Platform: PlayStation (PSX, PS1)
Sequel 3D fighting game Tobal significantly adds to all the parameters in comparison with its previous version. Now the game involves more characters, improved graphics, the combat system is expanded by the possibility of holding several counter-captures at once, and interactive elements appear outside the battle arenas. In particular, added more features in the quest mode with role-playing game elements. Now, except for the dungeons of the first game, cities are added where the hero can rest, eat and buy something in the store. These elements are important for the passage of the quest, because they affect the levels of attack, defense and strength of the hero. Just like it was said above, there are much more characters in the game. The fact is that while passing the game and defeating opponents, you get them as playable characters, the number of which is about 200. By the way, before the secret attack by fireballs is now available in normal mode.
‹
›
Home
View web version