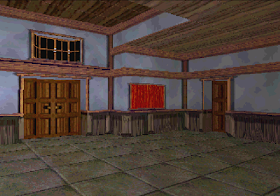 Genre: Action
Perspective: 1st-person
Gameplay: Puzzle elements, Survival Horror
Narrative: Detective / Mystery
Published by: Team Bughouse
Developed by: NK System Co.
Released: 1997
Platform: PlayStation (PSX, PS1)
The game takes place in January 1997. The protagonist is a young man named Akira, who works as a freelance occult journalist. One day he is visited by a woman whose daughter went on a trip with her friends and did not return. He agrees to her request to find a daughter who, according to her mother's latest information, was somewhere in the dilapidated mansion of Europe. Two weeks after this meeting, Akira together with her partner Angela are looking for this mysterious mansion and go there. This is where the game begins.
‹
›
Home
View web version