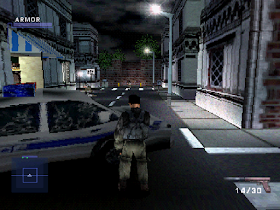 Genre: Action
Perspective: 1st-person, Behind view
Gameplay: Shooter
Narrative: Spy / Espionage
Published by: 989 Studios
Developed by: Eidetic
Released: 1999
Platform: PlayStation (PSX, PS1)
The main character Syphon Filter, brave spy Gabe Logan, this question is not asked. The presence of brains, he could not boast of either the first or second PlayStation, much less on her pocket incarnation. For him, always and everywhere thought the operational center, giving orders through the built-in ear microphone. All that was required of Gabe was to strictly follow orders, and he always managed to do it damn gracefully.

The miracles of hardening

Only Gabe, going on a special assignment to Alaska, can forget a knitted hat at home and run from one snowdrift to another without coughing or sneezing - and all for the viewer to admire the stylish hairstyle and masculine features. Let the enemies wrap themselves in camouflage and rub their ears with mittens - for our hero there is no bad weather. In the same suit, he travels through a snow-covered military base, beats himself to death in the Chilean hamlet in the hot sun, crawls along the dark cellars and peaks of the Alpine mountains.
In all of the above places, Logan is dealing with another world conspiracy involving American scientists, South African drug lords and Russian mafiosi. They all threaten, of course, the bulwark of world democracy in the person of the United States, and therefore are subject to immediate destruction. It sounds simple, but in reality Logan and his charming partner Lian Xing have to face a lot of different tasks, among which shooting live targets does not take all the time.

Set of the military oculist

The status of the dandy and dude Gabe justifies one hundred percent - he only has three kinds of protective glasses. "Thermal Imager" allows you to determine the location of opponents through thick walls, and is one of the most necessary items of equipment - without it you feel completely helpless. Night vision goggles help to navigate in the dark, and the most sophisticated binoculars are designated with the cleverest abbreviation EDSU and are designed to detect gauges, switches, locks and the like. Dress them should be if the future path is not obvious, despite the regular howls of the operator, Logan's coordinating action.
At the same time, Gabe can only drag four "trunks". Constantly you have to choose between "Kalashnikov" or a hard drive, a pistol with a silencer or with an optical sight, a Dragunov rifle or "Uzi". From this arsenal you will have to "mow" the aforementioned Russian bandits, sometimes causing hysterical laughter. All the same Yavlinsky looks like a young Don Corleone, but at the same time he talks like a Caucasian taxi driver, as a result of which the word "spit" in his performance is heard as "puke." Subordinates also do not lag behind - they shout during shootings, do not wear bulletproof vests and clumsily hide behind thin wooden doors.

James Bond did not stand nearby

The shooting of this circus does not cause any difficulties, since the management of the character and the work with inventory are almost perfect. The list of weapons and spy "gadgets" have to climb only the first quarter of an hour, after which all the necessary keyboard shortcuts are recorded on the subconscious. For the quality of the same picture, the brainchild of Sony Bend is not inferior to its brethren with the PlayStation 2. That there are only snow storms in Alaska: snow falls in flakes, white vapor from the mouth of the hero, the thick nast crunches underfoot ... Like a good Hollywood gunman, Syphon Filter is beautiful, dynamic and moderately interesting. And his protagonist, though he does not consume martini with vodka, all tries to be like James Bond. And while such stupid warriors stand guard over America, nothing threatens the country. At least in the virtual world.
‹
›
Home
View web version