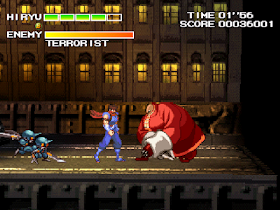 Genre: Action
Perspective: Side view
Visual: 2D scrolling
Gameplay: Arcade, Platform
Art: Anime / Manga
Setting: Sci-Fi / Futuristic
Published by: Capcom Entertainment
Developed by: Capcom Co.
Released: 2000
Platform: PlayStation (PSX, PS1)
The game is executed in a futuristic style, where ninjas make puzzling jumps and pirouettes, destroy everything around with the most fantastic tricks. It is clear that the continuation is more exciting and interesting than the first series. It is much faster, the control is more efficient, the quality of the graphics is much higher. Each level is divided into five sections. The first three of these sections you pass necessarily, in the chosen sequence, but the other two can only be accessed after you have passed certain stages. It is simply a delight to Strider Hiryu's ability to perform a wide variety of techniques; to cut mercilessly enemies at a fantastic speed; jump and stick to the ceiling; to deal with some ninja; perform powerful double jumps in the air, literally striding through the air, is cleaner Michael Jordan; Jumping from one wall to another between two buildings. This is a real super-hero, whose abilities can only be envied. And just because he's so cool. You will quickly deal with the most difficult missions that are to be accomplished. But once you finish the game, at your service will be even more cool guy Strider Hyien - the son of the old Strider, and you can play for him.