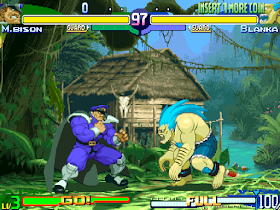 The Akuma performs against the R. Miki special treatment tatsumaki-zankukyaku. Both characters use A-ism mode.
In the home version of Alpha 3 with minor changes went all the modes from the previous two games and added several new ones (see below).
Survival Mode is a secret mode, present in the arcade version and representing the passage of a certain group of fighters, while having the same scale of health, passing from battle to fight. During the game in this mode, before each next fight, the player's character is given a certain amount of health.
Final Battle - secret mode, also present in the arcade version and representing a single battle with the final opponent of each character. In home versions, the mode becomes available when the arcade mode of the game is at its maximum complexity.
World Tour Mode - a single passage of the game, designed as a travel character in all locations of the game. During the course of the game, the player's character gains experience (there are 32 levels available), as he increases, he gets access to improvements for each of the combat modes and character balance parameters that can change during breaks between fights. Also, some characters can be accessed only by going through their levels in the World Tour Mode.
Entry Mode - an additional mode that allows the player to use the character from the World Tour Mode in some other game modes (for example, in arcade mode).
The mode of single passage in the arcade mode of the game consists of battles with ten or eleven computer opponents. The fifth and the ninth opponents are the story rivals of the character, the battle with which can be accompanied by appropriate dialogues before and after the battle. For most characters, the final opponent is M. Byson, presented in a special variation, officially called the final Bison (English Final Bison) and stands out mainly for the enhanced version of the Psycho Crusher super reception and a special energy scale. When playing for Byson himself or the evil Ryu, the final opponents are, respectively, Ryu and the true Akuma. Also, for some characters, the battle with Bayson can be preceded by one-on-two fights against Bison's guardians Juni and Julie, who use the same fighting style as Cammy or boxer Balrog.

The combat system in Alpha 3 basically follows the same rules as the previous game. As before, after selecting one of the available characters, the player is invited to fight in battle with an opponent (computer or other player) and win over him using a set of different techniques. Although all of the basic functions that are typical of the Alpha sub-series as a whole have returned to Alpha 3, however, they have been revised to some extent. The teams were changed to use both throws and captures, as well as counter-attacks from the block (Alpha Counter), which require the joystick to move forward with pressing the equivalent buttons of attacks by hand and foot in the attack on the block.
The main feature of the structure of the gameplay SFA3 is the division of the entire system into three independent combat modes, which the player can choose after selecting a fighter.
A-ism (in the Japanese version of Z-ism) - the standard combat mode based on the system of the two previous games and offering the player a three-division energy scale, on the degree of completion of which depends the ability to conduct super receptions of a particular capacity; the power of super reception is determined by pressing the button when entering the attacking button (for example, for Ken for super reception of the soryu-rappa of the second level, when you enter, the middle attack button is pressed by hand). Some super-tricks may require a fully-filled energy scale, like syun-goku-satu at Akuma or sippu-jinra-kyaku from Ken.
X-ism is based on the Super Street Fighter II Turbo system, including a single energy scale, after filling which the player can hold one certain (but powerful) super reception. In addition, characters in X-ism mode have more powerful protection and increased damage, but they do not have the functions of an air unit and counter-attack from the unit.
V-ism - the original mode based on heavily modified mechanics of random combos from SFA2; the energy scale in this mode is divided into two divisions of 50%, in the total amount of 100%. In case of filling by at least 50% the player gets the chance to start the random combo mode by entering into the battle all the "shadow" movements that follow the player's character, and the speed of following the "shadows" behind the character depends on the hand and foot that is pressed at the start of the combination of equivalent attack buttons. In addition, in the random combo mode, unlike SFA2, the player character can move freely. However, when attacking a character in the random combo mode, it automatically turns off, and the level of the scale is reset to 50%, or completely. In return for all this, the character of the player does not have the ability to perform super receptions as such and does less damage.
Based on this, the player can differently fight the same character. From the choice of combat mode can also partially or completely depend on both the coloring in which the character appears and in general the appearance. For example, Chun Li in X-ism mode is dressed in the original costume from Street Fighter II and has the famous Spinning Bird Kick, while the same Chun Li in A-ism mode does not have this special technique. Another example is M. Byson, who in X-ism mode has a known special device Psycho Crusher, which in A-ism mode is highlighted in a separate super-reception.
Also, the game was introduced a scale of protection level, self-filling before the start of the fight. For each character, the level of protection can be different. The level of protection available decreases every time the attack on the block, and in the event of a long absence of attack, it is restored to the original value. If the level of protection is reduced to zero, then a guard crash occurs, accompanied by a characteristic sound and animation, in which the enemy character becomes a special rack, becoming defenseless before the attacks of the character of the other player, while the level of protection with the filled scale is reduced.
‹
›
Home
View web version