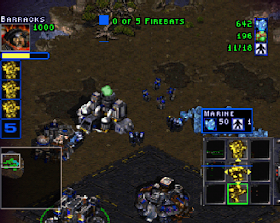 Genre: Strategy / Tactics
Perspective: Top-down
Visual: Free-roaming camera
Pacing: Real-Time
Interface: Multiple Units / Characters Control, Point and Select
Narrative: War
Setting: Sci-Fi / Futuristic
Published by: Nintendo of America Inc.
Developed by: Blizzard Entertainment, Mass Media
Released: 2000
Platform: Nintendo 64 (N64)
This is the most famous StarCraft, a super-strategy about wars between earthmen, protoss and zerg. Those who do not believe can play and make sure. The game contains all parts of the original game. Graphics, music, heroes - everything is done absolutely the same as in the computer version. Well, it's hardly worth talking about the gameplay. However, it can be recalled briefly: with the help of two types of resources (minerals, gas), the warring parties are fighting until they are completely destroyed by one of the parties or reached a certain goal. Missions are replaced by one another, they are complex and diverse. There is also a multi-player game mode. Recommended for everyone.
StarCraft 64 - in the distant future, a small group of human exiles were doomed to fight for their survival on the edge of the universe. Three strong alliances: Terrans, Protoss and Zerg, grappled in a fierce battle for the fate of the galaxy. Time for war has come. Manage resources, build armies, develop strategies and deal with the specialized technologies of each alliance, as you enter the universe of unprecedented tactical excitement. More than 50 missions in single player mode, including new scripts created for the N64.
‹
›
Home
View web version