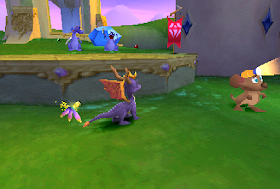 Genre: Action
Perspective: Behind view
Gameplay: Platform
Setting: Fantasy
Published by: Sony Computer Entertainment America
Developed by: Insomniac Games
Released: 1999
Platform: PlayStation (PSX, PS1)
In the first part of the game for us it was a huge temptation to get Spyro to jump from a high cliff into the water and watch this little hero drown. And now, with some disappointment, we inform you that it is no longer possible to repeat this atrocity, because in the continuation of this game Spyro learned to swim. In Spyro 2: Gateway To Glimmer, the player will be managed by a more adult dragon than in the first part. After the first part, when he defeated Gnasti Gnorik and his horrible legion of Gnincompopes, he acquired several new skills. We hope that his horned dragon balls will be removed from the game and the voice he was broadcasting in the first part and that was similar to the voice of Jack Lloyd, inhaled by helium, will be slightly lower. Not changing the wonderful and extremely convenient gameplay, the developers have brought into the game a lot of new goals and elements that need to be met. 29 levels filled with treasures (which are now used as a key for opening new arenas) and a bunch of people calling for your help. The new skills of the dragon include the ability to swim (the dragon knows how to swim, but it will be necessary to learn to dive), climb the rocks and soar down, plus new super-restorers of life added. Also added a lot of different mini-games including hockey, billiards and others. Spyro can now hit enemies at a distance, with the help of a new rocket and guidance technique. Spyro is still as good as before and is recommended for familiarization, this series is one of the best in the platformer genre for the PlayStation.
‹
›
Home
View web version