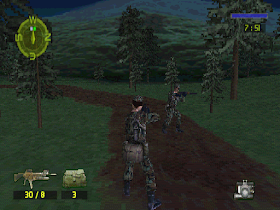 Genre: Action
Perspective: 3rd-person
Gameplay: Shooter
Published by: Take-Two Interactive Software
Developed by: Runecraft
Released: 2000
Platform: PlayStation (PSX, PS1)
A wonderful, but very sophisticated port of PC games for the PlayStation. Have you ever come to a local video store, buy a cassette with a bright cover, famous actors and a bunch of special effects, and then wonder at home why you have never heard of this movie before? Probably because this film will never enter the annals of the film history. The version for PC - Spec Ops: Rangers Lead The Way - and the missions attached to it were nothing more than titles for a good video. Nobody ever tried to push this game to the market, and so no one noticed. Games for PC just too much, and keep track of all the new items, just not possible. If you remember well the game for PC, then you will find here a little new, because there are almost no changes. You command a group of American paratroopers and before you - 5 real missions, each of which is divided into three or four sublevels. First you need to select a command. For each mission, you can choose two rangers, each of which specializes in a certain kind of weapons (machine gun, grenades, sniper rifles, melee and machine). During the battle, you can switch between your characters to perform different types of tasks. In fact, the game runs like a slightly lighter version of Tom Clancy's: Rainbow Six, but with clearly better graphics. Missions usually take place in the twilight or at night, this is rather strange at first glance, because the only way for you to notice enemy soldiers is to distinguish them from the red illumination. The creators of the game tried to make it even more user-friendly, so the rangers are several times stronger than their opponents who fall to the ground after two hits. You can even, if you want, make your rangers squat or crawl, which increases the accuracy of the shots. Missions divorced from stealing from various pieces to contract killing and sabotage. Since your team consists of only two people, this certainly increases interest (considering that the game can be played in conjunction with a friend) - kidnapping enemies and destroying strong points requires quite a lot of strategic skill - you need to place a sniper and grenade launcher in a good place, but at the very this is not so difficult. In principle, we can say that the Spec Ops: Stealth Patrol is a cross between Tom Clancy's: Rainbow Six and Syphon Filter. The game has a lot of subtle moments, but in some places it seems not quite realistic, but interesting, especially considering that in the PlayStation format there are not a lot of games on this subject.