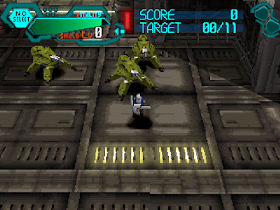 Genre: Action
Perspective: Top-down
Setting: Sci-Fi / Futuristic
Published by: Bandai America
Developed by: CyberConnect
Released: 1999
Platform: PlayStation (PSX, PS1)
You are a genetically modified government agent named Utah Faith, and you, as a large expert on everything that explodes, will have an operation in outer space that is administered by the Judicial Planet Alliance. The Hornet Army attacked this alliance by sending a huge space battleship operated by the elite Dante unit. You break through the battle through several levels, place bombs, toss them into your enemies. However, here it's not just explosions, this game requires a certain strategy, since the bombs not only destroy enemies, but can also cause serious damage to you if you are near the explosion. In addition, you have the opportunity to improve the combat characteristics of your character. For example, the range of bombs or their number. Depending on the changed characteristics, you can build your own combat strategies. Since the most important thing in this game is the action, you can skip a rather modest story line by clicking the Start button. As you know, despite the quiet name, this game is not at all quiet. The explosions are filled with literally all the soundtracks, although the music also supports the tension and is quite appropriate. It will be very unpleasant if during the game one of your friends or parents will try to distract you or ask you to do something. Perhaps this is one of the biggest troubles that can happen to you during the game.
This game belongs to the genre Action and should please the old school players with its atmosphere and gameplay, where you will travel literally through all the circles of hell. The game has a two-player mode, training levels and an aiming system. There are a number of missions to be performed, many explosions, in general, a worthy entertainment.
Management is simple enough and effective, but a number of techniques will require you to train fairly before you can perform them quickly and efficiently. The main essence of the game is that you need to blow everyone up faster than they do you, which is sometimes very problematic.

Finish the game once to get access to Advanced Mode. There you can choose any level you want to play.

Finish the game, and Advanced Mode will be available to you. You can then choose any mission and replay it to find the Data Chips you missed during the game.

Play for Mercure in VR Mode

Get rank B or higher on each level to play for Mercury. The easiest way to do this is in Advanced Mode after you finish the game.

Get rank A or higher on each level to play for Benoit. The easiest way to do this is in Advanced Mode after the end of the game.

Get to level C in every level and be able to play for Neko Tank, the easiest way to do this is in Advanced Mode after the game ends.

Achieve grade A on each level and get powerful E-Unit machines that will be a great help to Benoit in Battle Mode.
‹
›
Home
View web version