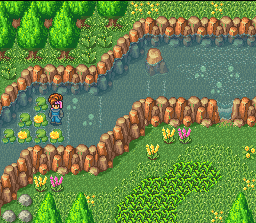 The game is the second part of the series Mana (Seiken Densetsu in Japan). The first is Final Fantasy Adventure, released on Game Boy in 1991. The plot of all the games are not connected in any way, they only flow in one universe, the plot of this game is the following.
Long ago there was a civilization that so mercilessly used the power of mana, that in the end the world became on the brink of death. Savior of all heroes, a magic sword that has eradicated the source of calamity - the magical fort of the empire, and the natural balance was soon restored. Centuries passed and history began to repeat. There was another evil empire hunting for mana power.
At random coincidence, the main character of the game finds the same mana sword, and therefore, he and save the world. However, the inhabitants of their native village thought that he had brought misfortune to them on the contrary, and from hell had driven him away. So the wanderings of the youth began, which destiny is destined to save the world.
The plot, of course, is not a revelation in the game, it's not that sharp turns, but, nevertheless, it still creates at least some kind of intrigue. Those. you will not have a feeling that he is just there for a tick.

We travel through cities and dungeons, we are pumped, we buy new ammunition, etc. A feature of the combat system is that with each sweep of the sword you will have to zero the power scale. It accumulates very quickly, but if you do not expect to fill it 100%, then the blow will be extremely weak. You can use not only the sword, but also other "glands": an ax, a spear, etc. With you will also run two companions, on which you can quickly switch. They have their own special weapons. Plus, there is a smithy in the game, which, I think, you'll guess for what? Yes, yes, weapon upgrades.
Magic is performed instantly. Well, when you apply it, but when the enemy is casting ... This is one of the most annoying moments in the game. Do not dodge, do not evade there is no possibility - it remains only to humbly accept all the machinations of the adversaries, as a matter of course. In battles with bosses, this too, believe me, will add a "pepper", especially if this magic not only removes a decent amount of HP, but also imposes some harmful status, of which there is enough in the game. Your characters sorcery is divided into classes, the main character in this business is not a boom-boom, the girl is a healer, and the forest spirit is an attacking magician.
Of the minuses, which I personally significantly strained during the passage - the frequent nonsense AI (artificial intelligence that controls your companions). The most terrible moment is when you need to run past the enemy, and he suddenly starts to fight with him. At the same time you will not be allowed to continue. Also very often computer players will be stuck in two pines, again interfering with your progress. However, this problem will be partially resolved if you play together, but rather three together (on SNES'e there was a special device for this). Another thing that undermines the dynamics of the game is the volatile creatures. After each blow, they must slowly rise, then flop to the ground, then rise again, and only after that you can strike them a second blow. Maybe it's trivia, but it's hard not to notice them.
Of the features of the interface is worth noting the system of rotating menus, which many consider a business card series. The system though and convenient, but it is necessary to get used to it. In general, despite minor flaws, playing Secret of Mana is nice, and most importantly interesting. For its time, the game turned out more than worthy, and many consider it almost a key milestone in the development of the genre Action RPG. Well, maybe they have overplayed the stick, but "not for personal gain", but only because of the great love for this glorious game.

All characters are not faceless, they all have replicas and their motives.

Main character. The orphan who was sheltered and brought up by the village elder, Potos. Once Randi managed to find a mana sword, since then his misadventures began. And the expulsion from the village was only the first step in his difficult fate.

The daughter of one of the nobles living in the kingdom of Pandora. Wishing good for his daughter, the father decided to extradite her for a rich and noble person. But you can not order your heart; she fell in love with an ordinary soldier, about whom, lately, neither hearing nor spirit. In his search, she met with Randi.

Very good. Juicy paints, beautiful background, catchy spec. effects and perfectly detailed scenery. The map of the locations is huge. At first you will have to move between distant points with the help of brothers gunnerships, which in the literal sense will shoot you from the cannon. And then you yourself can fly on the world map. At the same time, it uses the famous Snows Mode 7, responsible for 3D, with might and main.

Excellent. This, too, is perhaps one of the business cards of the series. The composer Hiroki Kikuta, not only composed melodies well, but also very competently used all the sound capabilities of SNES. The Secret of Mana soundtrack is dominated by wind instruments and percussion instruments, creating a folklore and fairy-tale effect with a slight admixture of Celtic motifs. Although there are (for my taste) a few questionable tracks, but in general, OST to the game turned out to be outstanding. And the title theme, playing on the title screen, has already entered the pearls of video-game music.
‹
›
Home
View web version