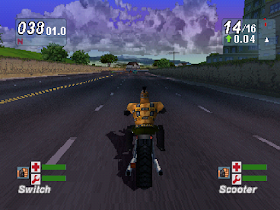 Genre: Action, Racing / Driving
Perspective: Behind view
Vehicular: Motorcycle
Published by: Electronic Arts
Developed by: Electronic Arts
Released: 2000
Platform: PlayStation (PSX, PS1)
EA created a series of Road Rash for about ten years, and, except for two exceptions, the series remained true to its creed - kicks and bonnetes during races on bikes. While many hardcore fans remained disappointed with the latest series on the PlayStation, Road Rash: Jailbreak fixes everything that was wrong with Road Rash 3D, and presents players with a lightning-fast, battle-filled new gaming experience.
Together with the return to the roots of the series, a new plot is set up. In the main game mode, you enter into an alliance with one gang of punks and dial ranks. You advance when you occupy the third place or higher. The more tracks you pass, the more points you earn for racing and massacre; These glasses will also give you extra weapons and nitro bonuses. The Five-O mode will allow you to play the role of a policeman. In this mode, you will advance, arresting thieves' duds. You will arrest bandits simply by striking, but in this mode it will be much more difficult. RR: J also includes a game for a while and several multiplayer modes, both for cops and for bandits.
Graphically the game is imperfect. As soon as more than three or four bikes appear on the screen, the FPS falls quickly. But the bikes and bikers themselves are modeled perfectly, and RR: J is still very playable. The sound is good, though, the game does not get the sounds of ridicule, which racer cast on the enemies. The gameplay - that's what gamers will buy this game for.
The game has a lot of tracks, but, unfortunately, they are similar to each other in design levels. Each track has several forks, and the arrow on the screen will show you which way to choose. Usually bifurcation is small, and often feels like all tracks are similar.
As a result, Road Rash: Jailbreak brings back the fun back to the series, the scuffles only complement the adrenaline of the races. If you like fighting with punks and cops on bikes using chains, crowbars, bare hands, then this game is really for you.
‹
›
Home
View web version