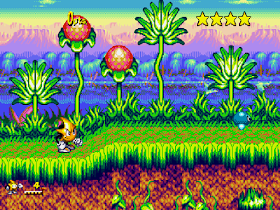 Genre: Action
Visual: 2D scrolling
Perspective: Side view
Gameplay: Platform
Setting: Fantasy
Published by: SEGA of America
Developed by: SEGA of America
Released: 1995
Platform: SEGA Genesis / Mega Drive
An excellent platform game made by Sonic Team released by Sega in 1995. The game tells of a new hero, similar to a star, the concept of which was still developed at the same time, when the legendary Sonic the Hedgehog. The hero does not have mega speed or high jumps, but he is able to stretch his arms for a decent distance. On what the whole gameplay of the game is built. The plot lines also diverge and differ from the European, US and Japanese versions. In the Valdi system where there are seven planets. The evil pirate Kaiser Greedy subdued the minds of their rulers. The inhabitants of the planet Neer pray, but evil enslaves and their minds. But the prayers have time to reach the goddess Oruto. She awakens one of her sons. That he would stop the evil. It was a Japanese version of the storyline of the game Ristar: The Shooting Star.
In the English-speaking, Ristar is sent to save his father, the legendary hero defending the Valdi system. He was kidnapped by pirate Kaiser Gridi.
The Japanese version of the game is called Ristar: The Shooting Star.
‹
›
Home
View web version