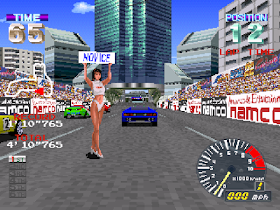 Genre: Racing / Driving
Perspective: Behind view
Gameplay: Arcade, Vehicle Simulator
Vehicular: Automobile, Street Racing
Published by: Namco Limited
Developed by: Namco Limited
Released: 1996
Platform: PlayStation (PSX, PS1)
Three new race tracks, parallel game mode of two players, the fastest cars and such amazing secrets that some readers may not believe. Nevertheless, we assure you: Ridge Racer Revolution - undoubtedly the best that is created for fans of the four wheels in the field of video games. Arguments? You are welcome! This game is more than just another race game; it is quite obvious that it reveals new horizons of this kind of games. Famous series of the company Namco can already be called a kind of independent culture. Generally speaking, the offer to buy "still a little bit the same as it was" rarely causes enthusiasm (unless, of course, it's Street Fighter or Mortal Kombat), but the creators of Ridge Racer Revolution managed to raise their genre to unprecedented heights.
The game Ridge Racer Revolution can safely recommend the Army Training Clubs to test the speed of the reaction. If you are driving a low-class car, you may have a false sense of racing safety, but try to change to a cool model - and experience the highest degree of tension: behind every steep turn you may be waited by a surprise! The most important component of the tactical equipment of your car is the rear-view mirror, especially when you do not need to let forward a strong opponent. Block his way - an old, but a true welcome!
It would be unforgivable to ignore the stunning music accompanying the race in the Ridge Racer Revolution. Here, the most wonderful elements of the soundtracks ever created for video games are skillfully woven. Namco musicians somehow managed to collect and concentrate a great many sounds of the street together, creating an incomprehensible hymn. In addition, we are again waiting for a meeting with a phenomenal commentator from the original game Ridge Racer. That's language, so language! In addition to the numerous placers of expressions of admiration or regret, it now has practical utility: as soon as any machine intends to overtake you, his voice urges you to "be ready to block." So you have every reason to forgive him bantering over your ride, which he now and then admits. Let!
‹
›
Home
View web version