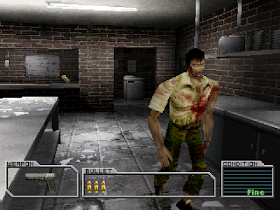 Genre: Action, FPS
Perspective: 1st-person
Gameplay: Puzzle elements, Shooter, Survival Horror
Narrative: Horror
Published by: Capcom Entertainment
Developed by: Capcom Co.
Released: 2000
Platform: PlayStation (PSX, PS1)
Capcom does not get tired of squeezing everything out of the ultra-popular BioHazard series (the native Japanese name for the game Resident Evil). The name of the game immediately brings to the player a simple and undeniable idea - you can survive only with the help of a pistol. Light gun, to be more precise .. After all, the game refers to games, commonly known as shooting, or ray-shooters (in the sense that the action as it is on the rails, but you only need to shoot and choose a fork). The role of targets in this dash will, of course, be played by vicious, disgusting half-decayed dead, terrible, making monsters not sleep at night. A firing position for the shooter will be the streets of Raccoon City, a city in which millions of gamers around the world know each lamppost.
But, sorry, you will say - because the problem with this long-suffering city is solved once and for all in the third part, what streets, zombies and monsters can survive, in the sizzling flame of a nuclear fire? Do not worry - the action of the game, apparently, will unfold until this moment, while Raccoon City was still standing, and zombies roamed its streets in search of the living, which can be eaten and / or at least bitten. Gun Survivor follows the path of the popular series from SEGA: The House Of The Dead - a gay toy with the "talking" title "House of Death," in which the player has to shoot dead dead and other evil spirits every second. It is worth noting that the fans of the Resident Evil series in the majority responded about the game extremely negatively, but I think this is an unfair observation, because the game should be perceived in the context of the genre, and not the series as a whole.

You can use a pistol, analog or digital joystick to control the game. In general, these control systems are similar enough, but the gun is more natural in this game and can be a great pleasure for the player. The analog joystick also allows you to use the vibration function, which is impossible with a pistol and a digital joystick. Here are the main management functions.
Movement on the screen is carried out using an analog joystick or D-pad.
Running: you must press the X button or the L3 button on the analog stick.
Shooting: the aiming is carried out by the button R1, the button Circle is carried out a shot.
To get to the Status Screen, click the Start button.
To access the main options menu, click the Select button. Once in the menu, you make a selection and exit the menu by pressing the X button.
Be sure to mix the plants at the first opportunity. This is very important and helps to maintain health. When you mix plants, you can create such combinations that allow you to maintain the Arch in an excellent sporting manner. This technology is known to everyone who used to play the games of the Resident Evil series. This game is no exception, but for those who for the first time meets with a game of this type, we give below the combination.