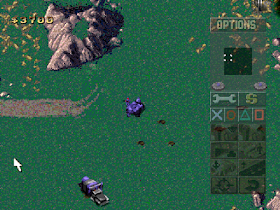 Genre: Strategy / Tactics
Perspective: Bird's-eye view
Visual: Free-roaming camera
Setting: Europe, Sci-Fi / Futuristic
Pacing: Real-Time
Interface: Multiple Units / Characters Control, Point and Select
Narrative: War
Published by: Virgin Interactive Entertainment
Developed by: Westwood Studios
Released: 1998
Platform: PlayStation (PSX, PS1)
Fascist Germany is defeated, but the war continues. The Soviet Union is fighting for spheres of influence. Stalin, who clearly survived his term, prepares nuclear weapons at secret factories. The allies do not slumber too. In their arsenal are such fantastic technologies that no modern army has. Espionage and sabotage, secret missions and general battles. All that you can dream of, a fan of real-time strategy. Command & Conquer - one of the most famous games of this genre. The version released in the 94th year includes over thirty missions and about a hundred maps. You have the opportunity to play both for the Allies and for the Soviets, however, in any case, you will have to face some Russophobia of the authors. For some reason, Americans are always saving refugees, and our sources are poisoned. However, we will consider that such attacks only concern the Stalinist empire. The strategy and armament of the parties, one of which you choose, are significantly different. Tesla's power plants surprisingly well protect the bases of our compatriots. The awkward and invincible tank Mammoth crushes any defense. Allies do not have such achievements, but their cruiser destroys any Russian object with one volley. However, the ship, you know, can not always help. For some reason, Soviet armament is more effective against infantry, Western - against technology. In a word, whoever is stronger can not be determined. And for whom to play - decide for yourself.

In the middle of the game, press the Triangle to bring up the side bar, move the cursor over the following symbols and key in the sequence with the Circle button:
‹
›
Home
View web version