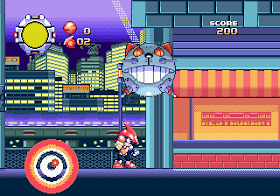 Genre: Action
Perspective: Side view
Gameplay: Platform
Visual: 2D scrolling
Art: Anime / Manga
Setting: Sci-Fi / Futuristic
Published by: SEGA Enterprises Ltd.
Developed by: Game Freak
Released: 1994
Platform: SEGA Genesis / Mega Drive
This platformer is something similar to the favorite game of many about Sonic. The game takes place in the 21st century. The famous scientist and engineer Doc Yoshiyama creates the most perfect artificial intelligence in the world, which has its own thinking and feeling. He calls it "C-Life". Rather, the scientist notices that he has fallen in love with this electronic girl and wants to be closer to her. He digitizes and loads himself into his computer. Where the love-stricken DNA and its main programs are reunited. As a result of their love appears half-man, half-car C-Life boy named Pulseman (Pulseman). His uniqueness was that he did not have to stay inside the system to survive. He could direct an electrical impulse through his body, using it as a weapon. He could also be transported by electric wires.
Unfortunately, Doc Yoshiyama was so long inside the computer that his brain and body were divided. Doc Yoshiyama returned again to the human world, but different, he turned into an evil Doc Waruyama. Now he is creating the Galaxy Gang, spreading a new wave of cyber terrorism all over the world. Now the Pulseman must fight his own father, and put an end to this chaos.
‹
›
Home
View web version