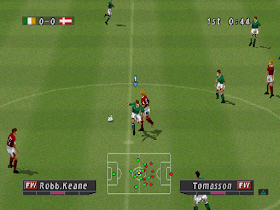 Genre: Sports
Perspective: Bird's-eye view
Visual: 2D scrolling
Interface: Direct Control
Sport: Football (European) / Soccer
Published by: Konami Corporation
Developed by: KCE Tokyo
Released: 2001
Platform: PlayStation (PSX, PS1)
Konami again had problems with licenses, so unlike the first game, unlicensed clubs stopped wearing the names of their cities, and the Dutch players were called "Oranges". This happened because of the Royal Netherlands Football Association's ban on the use of the names of Dutch players.
From the pleasant it can be noted that the dynamics of the game has significantly increased, the speed of the gameplay has grown, players have become sharper in playing, and the struggle for the ball has become more rigid. In addition, new clubs and a new division were added to the Master League, as well as two new commentators - Peter Brackley and Trevor Brooking - who contributed to the gameplay.
‹
›
Home
View web version